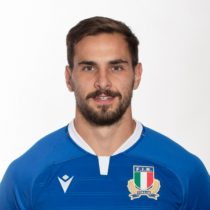 Born and bred in Padova, Bellini became one of the most exciting young backs to wear the prestigious Petrarca shirt as a teenager.

A former Italy Under 20, Sevens and Emerging Italy pupil, he first landed at Zebre in 2015 as a permit player only to sign his first professional contract for the PRO12 side ahead of the 2016/2017 season.

Mattia can play full-back and outside centre but it is as a winger that he got the surprise call into the Azzurri group two years ago.

His speed, agility and ability to beat the defender, along with a good defensive attitude, brought him on to the radar of former Italy coach Jacques Brunel’s and in November 2015 he was called to join the National Team set-up straight from the Eccellenza for a training session in Treviso.

Bellini’s Test debut came on February 6, 2016 on the left wing when Italy narrowly lost out to France at the Stade de France in the Six Nations and that performance was good enough to cement the Zebre flyer as a starter for the rest of the Six Nations.

As a young and versatile power winger, Bellini was included in the wider group of Azzurri in 2016 with Conor O’Shea closely monitoring him and established himself as a key player in the long run to the 2019 Rugby World Cup.

By January 2018, Bellini had scored 5 tries in 11 appearances for Treviso in the Pro 14 and was included in Italy's 6 Nations squad where he added to his 8 test caps.