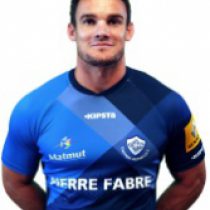 A versatile outside back, Evans can play in the centre or on the wing and earned his first cap for Scotland against Canada in November 2008. He scored his first try for Scotland on 8 February 2009, after coming on as a substitute for his younger brother, Thom, in the 2009 Six Nations Championship match against Wales. On 10 May 2009, while playing for Glasgow against the Ospreys, Max sustained an injury to his knee, ruling him of competition for at least six months. On 14 February 2011 Evans confirmed he would leave the Glasgow Warriors after 4 seasons to join Castres where he currently plies his trade as one of the Top 14's most deadly wingers.