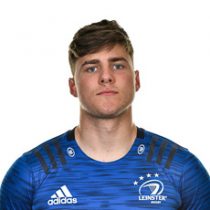 A speedster with all the attributes to make it at the highest level, Max O'Reilly began his journey to professional rugby at St. Gerard's School in Bray.

A native of Enniskerry in Wicklow, O'Reilly featured for the Irish u20s and debuted for the side against the Baby Blacks in 2019 during the World Rugby U-20 Championship in Argentina.

The Dublin University full-back was a late call-up to Noel McNamara‘s squad for the tournament in Argentina and won two caps for the side before cementing his place in the U20 Six Nations squad for 2020.

A gifted player, O'Reilly also has 7s experience having debuted for the Ireland 7s team in 2019 at the Rugby Europe 7s Grand Prix 2nd leg.

He was selected to start his first senior game at fullback for Leinster in round 10 PRO14 game against Connacht in January 2021 at the age of 20.