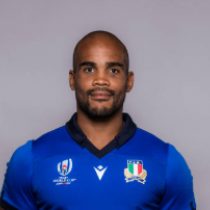 Born in Rome to a Congolese father and Italian mother, Mbandà grew up playing in Milan first in the youth of Amatori Milano and then with Grande Milano before being selected in the summer of 2012 by the Italian Academy "Ivan Francescato" of the Italian Rugby Federation of Tirrenia.

His senior rugby debut was in April 2012 for Grande Milano in Serie A2. Moved to Calvisano playing in two Eccellenza finals in 2015 & 2016, winning the former. Made his PRO12 debut for Zebre at home to the Dragons in March 2015.

Debut for Emerging Italy was in the Tbilisi Cup in 2014 against Argentina, he also played for them in the same tournament twelve months later scoring a try against Georgia.

Made his test debut on the flank against the USA in San Jose last June and added second cap in the same shirt against Canada the following week. Gained a third cap in the No.6 shirt against New Zealand in November

Made his RBS 6 Nations debut against Wales last weekend in Rome. He has won 4 caps to date.

In October 2017, Mbanda signed a new deal with Italian rugby and Zebre until June 2019. He has won 11 caps for Italy and has become a starter under Conor O' Shea.

Ahead of the 2019 Six Nations, Mbanda has had 9 previous 6 Nations appearances. He has yet to score any points.