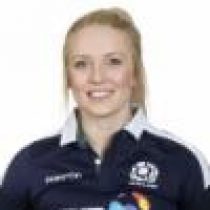 Megan has played for Scotland at under-18, Scotland Women A and Scotland under-20.

She made her international debut off the bench against the Netherlands in Amsterdam in November 2011 .

Megan was selected to play for the GB team at the World Student Games 7s in Brive in July 2012 and scored a try against Romania on the way to GB's title win at the tournament.

In January 2017, she was named in Scotland Women squad for the 6 Nations tournament.