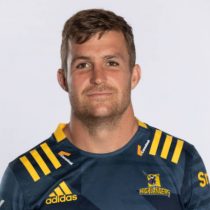 His call up at Otago saw him decline offers from Melbourne Storm and ITM Cup Premiership side Waikato.

He had two seasons in Wales playing for the Scarlets and returned to play 29 games for the Blues between 2017-2019.

October 2016 saw him earn his first Super Rugby contract with Auckland-based Blues side for 2017, a deal that was later extended beyond the 2017 season.

During the 2017 Super Rugby season, Collins made 14 appearances scoring two tries having been used mainly as a utility player.

At the end of the season, Collins' contract at Auckland was extended for another season, after being rewarded with the Club Rookie of the Year award.

Known as an intelligent player, he can play in the midfield or at fullback and is looking forward to playing at home “I’m excited to make the move closer to home and represent the region I grew up in”.

In late 2019, he signed a deal with Highlanders ahead of the 2020 Super Rugby season.

In May 2021, Collins signed a deal to join Welsh region the Ospreys.

He brings a wealth of experience, having captained Otago in Mitre10 Cup rugby and played more than 40 Super Rugby games for the Blues and the Highlanders. During his time in New Zealand rugby, Collins has earned a reputation for being an intelligent footballer with genuine leadership qualities.

Collins, who qualifies for Wales through a Welsh grandfather, played in the PRO14 during a short spell with the Scarlets back in the 2015-16 season.

His ability to play in the midfield and in the back three is a major asset for the Ospreys.