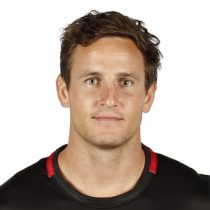 Mike was signed to the Reds on a two-year deal in 2011 after impressing coach Ewen McKenzie during his four seasons playing at North Harbour in the National Provincial Rugby competition.

A knee injury crippled his finish to his breakout year, missing the final seven matches, after making his Super Rugby debut against the Waratahs in round two from the bench.

Despite having already played for New Zealand at a junior level, Mike is eligible for Wallabies selection by the way of an Australian-born grandmother.

After missing selection for the Wallabies at the 2015 World Cup, Harris was named in the 39-man squad for the 2016 international series against England.

Harris moved to Lyon for the 2016-17 season and quickly made a mark as they defeated Toulon early in the TOP14 campaign.

He made 23 appearances for the club, sharing the fly-half duties with French verteran Freddy Michalak.

Harris guided Lyon in one of their most successful seasons in the club's history scoring 94 points in 20 appearances with his accurate boot before confirming that he would join Japanese club Toshiba Brave Lupus.