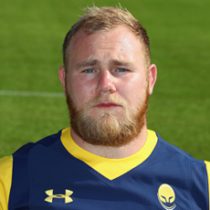 Daniels was part of Bath Rugby Academy in 2010 to 2011 before moving to Northcote Birkenhead Rugby Club in New Zealand for the 2011 campaign.

He then studied Chemistry and Sports Science at Loughborough University whilst playing for Loughborough Students RFC until moving to Warriors in the summer of 2014.

The prop enjoyed a fine debut season making 19 appearances for Dean Ryan's side, including an outstanding 70-metre try against Doncaster Knights at Sixways.

Daniels linked up with Championship newcomers Hartpury RFC for the 2017-18 season before signing for Nottingham in the summer of 2018.

February 2019 saw him sign a deal with Premiership club Wasps.

He made one Premiership appearance for Wasps before being loaned to Nottingham.

In September 2019, he signed a one-year deal with Newcastle Falcons.