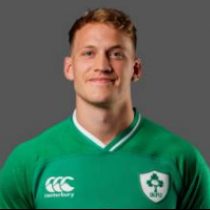 Preston born and Irish qualified, Mike Haley attended Hutton Grammar School and is a product of the Sale Sharks Academy.

The exciting fullback made his professional debut against Saracens in the LV= Cup semi-final, March 2013 while spending time on loan at Preston.

During his time at Sale Sharks, Haley made over 100 performances for Greater Manchester-based side. In 2016, Eddie Jones called the fullback up to his England squad but Haley did not make his test debut for the side.

Haley made the switch to Munster signing a three-year contract ahead of the start of the 2018/19 season. The Preston native is Irish qualified through his maternal grandmother who hails from Tralee, Co Kerry.

An impressive debut season at Munster saw Haley play more minutes than any other player with the full-back racking up 1,876 minutes in 26 starts. His form was rewarded with his first Ireland call-up for the training camp ahead of the 2019 World Cup and made his international debut against Italy in August 2019.

Haley's fast start at Munster saw him rack up 41 appearances for the side by June 2020 and had scored seven tries. He will also look to add to his single test cap.