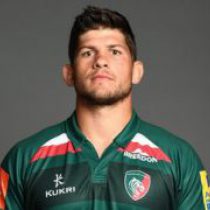 Born in Bulawayo, Zimbabwe but English qualified, Williams can operate in the second row or back row. He is a powerful ball carrier and superb lineout technician that relishes the opportunity to get stuck into the opposition.

He captained the Sharks at age-group level in South Africa before deciding to further his career with Tuks and the Pretoria based Blue Bulls. Williams moved to Leicester Tigers in 2015 and after some stellar performances with the London side, Williams was selected into Eddie Jones's 2017 English Six Nations squad.

After 37 appearances for Leicester Tigers, the Zimbabwe-born Williams agreed new contract terms to remain at Welford Road beyond the end of the 2017-18 season.