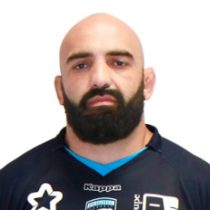 Nariashvili is a Tbilisi born prop who joined the Montpellier Training Center in 2010 and went on to win the France Reichel Junior Championship in 2011.

His Top 14 debut came on 14 October 2011 against Bayonne and he earned his first cap for Georgia against Spain on 11 February 2012.

The talented Nariashvili joined Montpellier’s senior side side straight from their training centre, which he joined in 2010, before signing his first professional contract in the 2012/2013 season.

In May 2017, Nariashvili signed a deal with Montpellier that would see him remain at the club until 2022.

The Georgian international has become an asset for Montpellier thanks to the experience he has acquired over the years.

Ahead of the 2017 November Internationals, Nariashvili had earned 44 caps for Georgia.

As of September 2019, he had represented Montpellier on 135 occassions.