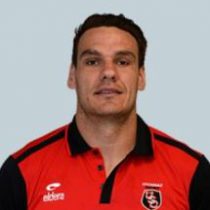 In 2012 Mitch was a standout player, in defence in particular, where he always leads by example. His efforts were rewarded when Wallaby coach Robbie Deans called the young centre onto the Wallabies Spring Tour, where he fell agonisingly short of making his Wallaby debut.

Mitch is well known in Rugby circles for his time spent at Sydney University in the Shute Shield competition, where this year he won his fourth premiership. His first premiership was in 2008, alongside current Rebels Head Coach Damien Hill.

Before dominating the Australian Sevens arena, injury stunted any early success for Inman. An elbow injury and hamstring issues curtailed parts of his 2011 and 2012 seasons.

Entering his 5th season with the Rebels, Inman has scored 30 points in 69 Super Rugby appearances since his debut in 2010.

In June 2017, Inman signed a deal with Oyonnax and will join the club following the conclusion of the Super Rugby season.