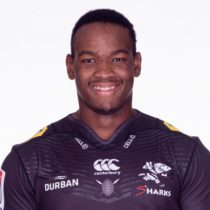 A promising young prop Majola represented the Sharks at the 2013 U18 Craven week.

After school Majola joined the Sharks Academy and become a pivotal part of the Sharks U19 pack.

2015 saw Majola make his first class debut for the Sharks XV when he came off the bench against Western Province during the 2015 Vodacom Cup.

Later that same year he was included in the South African under 20s squad for the Junior World Championships in Italy.

He capped off a fine season when he made his Currie Cup debut against the Bulls.

Majola was loaned to the Southern Kings for the 2017 Super Rugby season and made his debut against the Lions on 28 May.

Majola made 3 other appearances in Super Rugby and re-joined the Sharks for the Currie Cup.

In October Majola signed a deal with the Southern Kings for the 2017/18 PRO 14 season.

Majola made 2 appearances for the Kings in Pro14 and has been included in the Sharks 2018 Super Rugby squad.