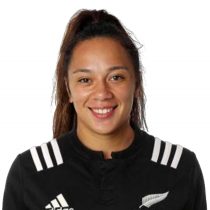 A standout player for the Auckland Storm in the 2018 Farah Palmer Cup competition, winger Natahlia Moors brings with her a deadly combination of express pace and classy finishing.

After a strong showing at the 2017 National Sevens for Auckland, Moors attracted the attention of the Black Ferns Sevens coaches and was named as one team’s 23 contracted players for the 2018 season.

The Ponsonby rugby club player enjoyed a breakout year for the Auckland Storm in 2015, finishing with nine tries in a side that claimed the title.

As a junior, Moors represented Australia at the Youth Olympic Games, but has since returned to New Zealand to pursue her rugby career.

Moor made her test debut against France in 2018.