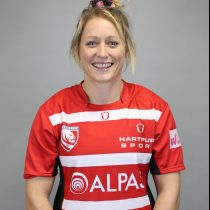 Gloucester-born Natasha was educated at Dean Magna Community School, Hartpury College and Bath University., Natasha’s sporting career began at the age of 17 when her PE teacher suggested that she tried rugby and it was love at first sight.

Her England dream became reality in the space of a few months as she progressed from the West Midlands trials, the high performance academy and trials for the England U20 squad.

She went on to start the 2014 World Cup final that brought her 29th cap and the triumph over Canada.

Her sevens exploits include scoring two tries against hosts Brazil in the World Series event last February and a try in England’s opening match in the Langford tournament in April when Ireland were beaten 29-5.

She scored 112 points in 11 events, comprising 22 tries and a conversion and made another two touchdowns in the 29-3 pool win over Brazil when representing Team GB in the Rio 2016 Olympic Games.

Returning to the 15s game after the Olympics, she was awarded with a full-time professional EPS contract in September 2016 ahead of a huge year for women's rugby, with the Old Mutual Wealth Series, 2017 Six Nations and the 2017 World Cup in Ireland. She won her 30th cap in the 10-5 win over France at Twickenham Stoop this November.

A PE teacher at Sir Graham Balfour School in Stafford before being rewarded with a full time contract with the RFU, Gloucester-born Natasha was educated at Dean Magna Community School, Hartpury College and Bath University.