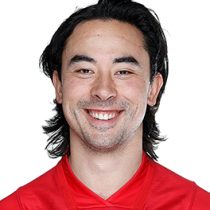 Has found his home in Sevens over the years, captaining Canada in recent campaigns and becoming a regular try scorer on the circuit. A fly-half or full-back in the fifteen man game, Hirayama was a member of the Canadian squad that competed at the 2011 Rugby World Cup. Continued good performances in the Canadian jersey in both the 7 and 15 man game over the last number of years led to his inclusion in the final 31-man squad for the 2015 Rugby World Cup in England.