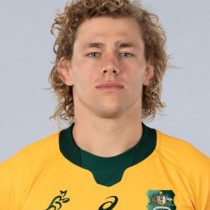 Born in Dubbo, Hanigan was a standout in the Australian Under 20s Junior World Cup campaign in Italy in 2015, Ned Hanigan is increasingly making a name for himself as a genuine test forward.

He left his hometown in central west NSW when he was 12 to attend Sydney’ rugby nursery, St. Joseph’s College having never played rugby in his life. It was there that his love for the game ensued and his talent started to become apparent, and he was soon selected to represent his country with the Australian Schoolboys on their 2013 Grand Slam European tour.

In February 2014 Hanigan started boarding at UNSW’s Goldstein College, where he studied science, together with his Waratahs teammate Andrew Deegan, both on partial scholarships from the Randwick Rugby Club. He played in Randwick’s Premiership-winning Colts side and NSW Under 20s in 2014. He also worked for Gai Waterhouse as a stable hand and handler for her horses.

In what was an impressive year for the then 20-year-old, Hanigan received interest from the Melbourne Rebels but decided to take his home state’s call and join the Waratahs extended playing squad. He also trained and played with the NSW Country Eagles in the Buildcorp NRC.

Less than a year later, he has already received a call-up to the Tahs’ main squad and was one to keep an eye on in 2016 after showing some promising potential and a tough work ethic, making 3 appearances for the side.

In June 2017, he earned his test debut against Fiji starting the game in the blindside jersey. One of the versatile forwards in Australia, Hanigan can cover both loose forward and the second row.

He was sidelined with a knee injury in 2018 but still went on to play 15 Super Rugby games for the Waratahs. Hanigan missed out on a place in the Wallabies' Rugby World Cup squad and ended 2019 with 12 test caps for Australia.

He also enters 2020 within touching distance of 50 Super Rugby caps.