Australian Round-Up from Round 2 of Super Rugby 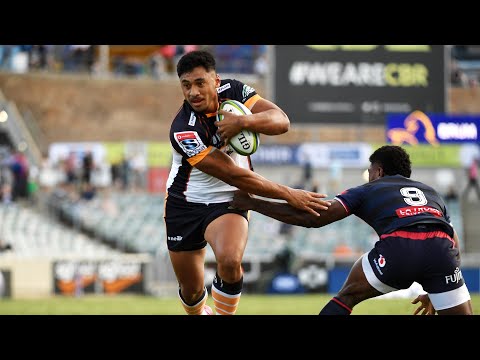 The Brumbies put one over local foes, the Rebels, in Canberra on Friday evening, thus maintaining an unbeaten record so far in the competition.

It was a good attacking performance by the home side who managed to run in a strong total of six tries, courtesy of Irae Simone, Tom Banks, Tom Cusack, Solomone Kata, Tom Wright and hooker Folau Fainga’a. Noah Lolesio rubbed salt in the Rebels’ wounds with three conversions and a drop goal.

The Brumbies looked in fine form, displaying often sublime handling skills and running lines with an attitude brimming with confidence. Their win boosts them up to the top of the Australian conference as well as second place in the overall standings.

Although the Rebels remained competitive throughout the game, it never looked as though they would be coming away with the victory. There were some flashes of competency which allowed the Melbourne men to cross the try line on four occasions and they showed good character to keep fighting and claw back 26 points from a game in which they were, at one point, losing 24-0.

This was the Rebels’ second consecutive loss and they now find themselves bottom of the Australian log and twelfth on the overall standings.

The Waratahs were nothing short of abysmal in their defeat to a niggly Blues team on Friday.

Coach Rob Penney, in his first Super Rugby season in charge of the Sydney-based team, has an impressive coaching record thus far but it appears he has his work cut out for him this year.

It was difficult to ascertain whether the Waratahs, in fact, had any sort of plan whatsoever as they seemed to merely coast along in a state of bewilderment until the final whistle sounded.

Most of the possession they were blessed with was aimlessly kicked away, their forwards were monopolised and, even more worrying, their defence was woeful; it often seemed as though the Blues were playing shadow rugby.

It would seem that the only real positive that the Waratahs may take from their performance is that they can surely only improve from here.

The Reds went down to a plucky Lions team in difficult conditions in Johannesburg on Saturday afternoon.

Torrential rains had rendered the playing surface sodden and a scrappy performance ensued.

Strangely enough, despite dominating the set-pieces, the Reds were unable to convert that usually substantial advantage into a victory. Their opponents, with the likes of livewires Tyrone Green and Morne van den Berg, were enthusiastic in broken play and managed to convert most opportunities into points.

The Reds did cash in with tries from Jock Campbell and Tate McDermott with Bryce Hegarty converting both and adding two penalty kicks of his own.