Aviva Premiership - Team of the Week

Bath fronted up well against the league-leaders, Exeter, and were unlucky to only come away with the losing bonus point. Their tight 5 in particular really increased the intensity of their play to match the abrasive Chiefs pack. Their loosehead had a fine game, making a massive 21 tackles, only missing 1. He also carried hard and aggressively, leading to a gain of 17m from his 6 possessions.

Gloucester just managed to overcome the struggling London Irish, away from home on Saturday afternoon. Australian hooker, Hanson, scored one of their tries on the day. He was one of his side’s most prominent carriers in the pack, trucking it up 8 times for 36m.

The Bath tighthead was not to be outdone by his front row union teammate. He locked out the scrum against a bigger Exeter pack, and also put a great shift in in the loose, equalling Obano’s tackle count of 21 and making 9 carries for 14m. 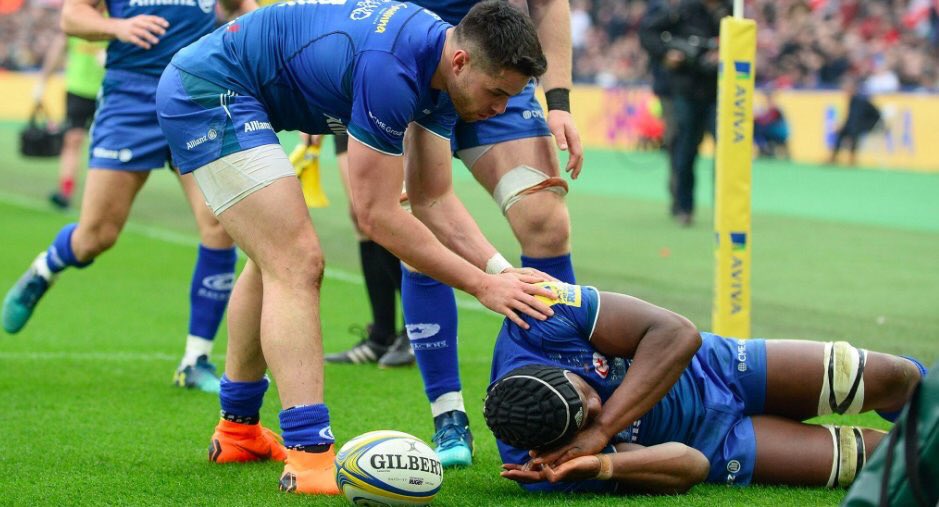 No sign of fatigue from the English international. He looked like he was out to prove a point out there today, as he carried more frequently than usual and performed everything that was asked of him with great intensity and dynamism. His first carry, a minute into the game, set the tone for his side for the day, as he barged his way over the gainline. The number 4’s try was ridiculously impressive, as he shrugged off a couple of defenders, before running it in from the 22. His post-try celebration took a dig at the critics that complained during the week that he was being flogged, as he pretended to take a nap in the in-goal area.

The Harlequins captain worked tirelessly to try and get his side back into contention in London Stadium on Saturday. He got over for a try himself which gave his team a boost but Sarries proved to be too strong in the end. A couple of turnovers from the Aussie also helped stall Saracens’ momentum but more is needed from his teammates if they are to get back in the playoff positions.

If the Irish are to take anything positive from another home loss on Saturday, its that their blindside flanker is coming into a period of good form when it really matters. The former Springbok beat a massive 7 defenders from 18 carries for a gain of 27m. He managed to get the arms free for an offload on 3 occasions. Hopefully some more of his teammates can turn their performances around like he has to save them from the drop.

A man of the match display from @FalconsRugby's Will Welch 👊 pic.twitter.com/55c5B5Rcx4

Falcons came away with the victory in a tight, back-and-forth game at St. James Park, on Saturday. Their openside was given the MOTM award for his impressive defensive performance on a day when money was being raised for Motor Neurone’s disease. He had a perfect tackle success rate, making 14, and also won a couple of turnovers to help Newcastle to the crucial win.

England’s new number 8 impressed once again this evening and was deservedly awarded Man of the Match. The back-row carried powerfully at every opportunity and muscled his way over from close range to extend Exeter's lead in the second half. He was a menace at the breakdown and won two vital turnovers which helped the Chiefs cement the victory.

What a signing he's been for Sale Sharks. Dictated the pace of the game well today as the Sharks were convincing winners over Worcester Warriors. Finished off a fantastic team try for Sale and even managed to slot a penalty on his way to collecting the MOTM award.

The younger Simmonds brother was not to be outdone by his elder on Friday night. He was chosen at stand-off over the much more experienced Gareth Steenson and did not disappoint. He kicked the winning penalty through the posts, with just 5 minutes left on the clock, showing the confidence that he has in his abilities. He also played a great game with ball in hand, beating a number of defenders and gaining 50m himself. Most definitely one to watch for the future.

Gloucester’s winger had a game to remember on Saturday as they got the away win. He bagged a couple of five pointers from himself as he ran the Irish defence ragged, beating 5 defenders and making 3 clean breaks. His scores proved to be crucial as only one score separated the sides at the death.

The young outside centre was one of the best players on the field at London Stadium on Saturday. Up against the ever-experienced Marcelo Bosch, he caused the well-regarded Sarries defence real problems. His immense pace was on show on a number of occasions as he broke down the outside. He beat 8 defenders for 89m which is extremely impressive against a defence that is known to be one of the best in Europe.

The rugby league convert just can’t stop scoring for Sale this season. He sits 2nd in the try-scoring list with 11 so far, and he is sure to get a few more before the season finishes in a couple of months. The Sharks thumped the Warriors on Saturday and it was largely down to their threats out wide. Solomona bagged just one try for himself but his clean breaks put Sale on the front foot again and again, which led to more five pointers for the Northern-based side.

Solomona’s teammate in the back three was on fire at AJ Bell Stadium. He bagged one for himself and assisted two others to the try-line in a magnificent performance. 7 defenders beaten isn’t half bad and he will be a great asset to Munster next season as he changes soil for a chance to play internationally.