The Knights welcome Richmond to Castle Park tomorrow looking to claim a third successive league win and continue the climb up the Championship table.

Doncaster enter the game in fine form with a convincing win over Hartpury, scoring six tries to claim a bonus point victory. While the Knights also become just the second team this season to come away from the Butts Park Arena after a 23-17 win over Coventry.

Richmond haven’t won in the Championship since October after a 22-5 win over Coventry. Since then the London based side have faced a tough run of fixtures and succumbed to defeats from London Irish, Jersey Reds, Ealing Trailfinders, Nottingham and Bedford Blues. 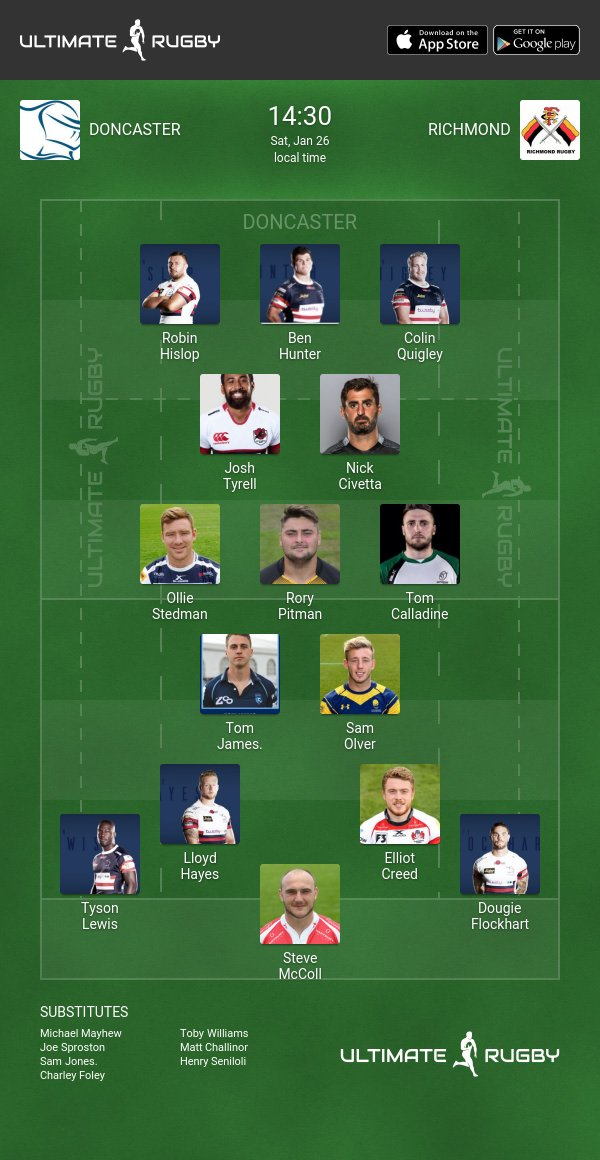 With injuries affecting the team, Richmond have brought in new arrival Callum Sirker straight onto the wing for his first start. The 20-year-old winger arrives from Wasps, and brings England 7s talent with him. 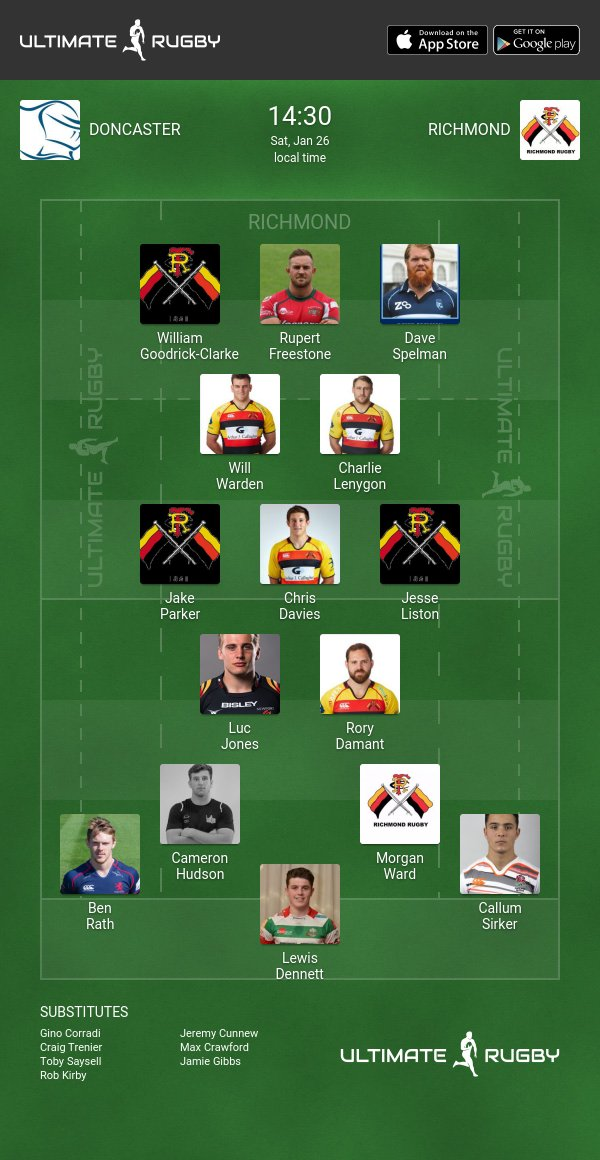 The Blues make a handful of changes to the team which tasted defeat to Jersey Reds last weekend with James Lennon and Jake Sharp forming a new half back combination with Lewis Robling reverting to outside centre. Jacob Fields and Ben Cooper return to the front row with Ed Taylor behind them and Huw Worthington at openside flanker while Mark Flanagan captains the squad. 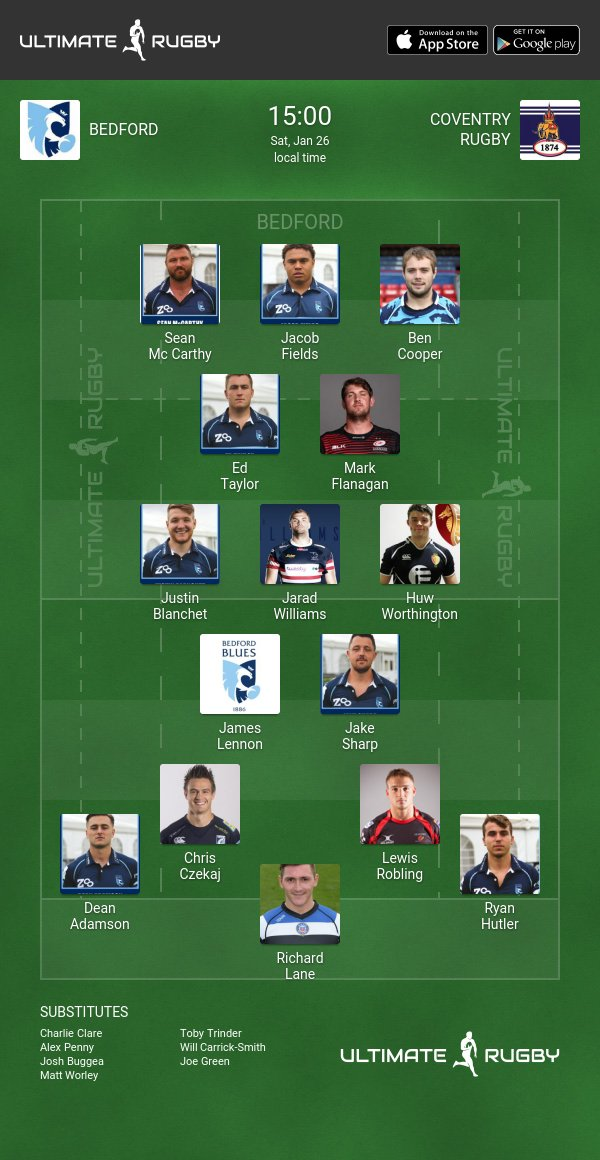 After claiming two tries in the second half of last Saturday’s thrilling 18-17 home win over Cornish Pirates, hooker Scott Tolmie will be seen from the first whistle of Coventry Rugby’s round 13  Championship visit to Bedford Blues tomorrow.

His switch of starting and bench roles with Darren Dawidiuk is the only change the Blue-and-Whites’ coaching group make to the forwards named in their matchday 23. 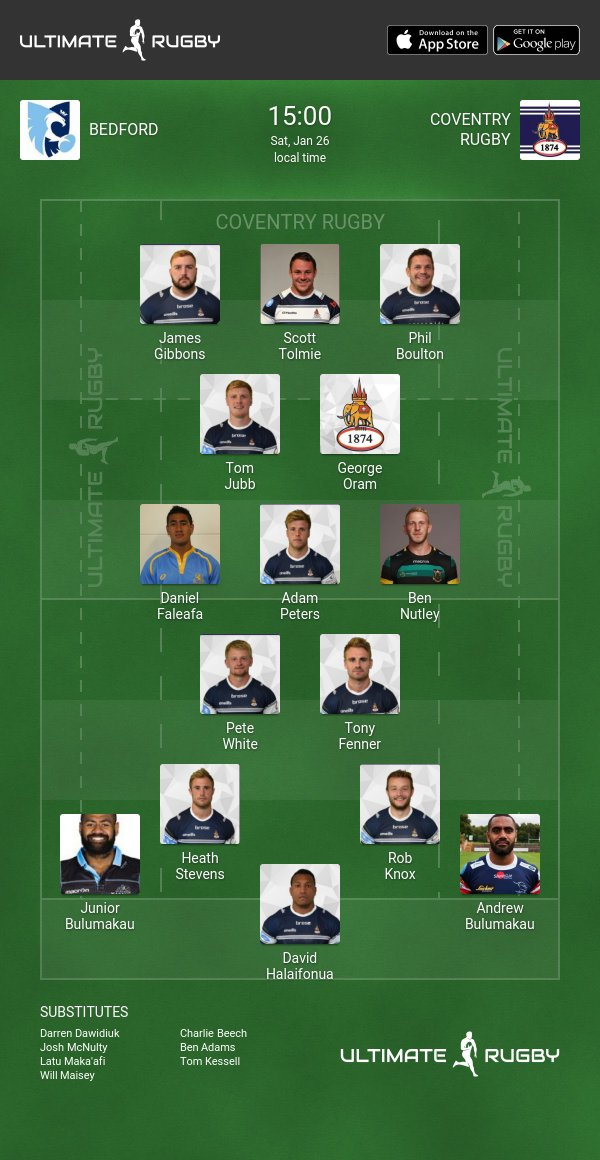 London Scottish have made a few changes to the 22 that will welcome Nottingham to The Athletic Ground tomorrow at 3pm.

Two changes come in the front row as Jordan Brodley and Jonny Harris swap spots with Phil Cringle coming in for an injured Richard Palframan. Jimmy Litchfield comes in on the bench.

James Tyas continues in the second row meaning Scottish have four back rowers in their forward pack. 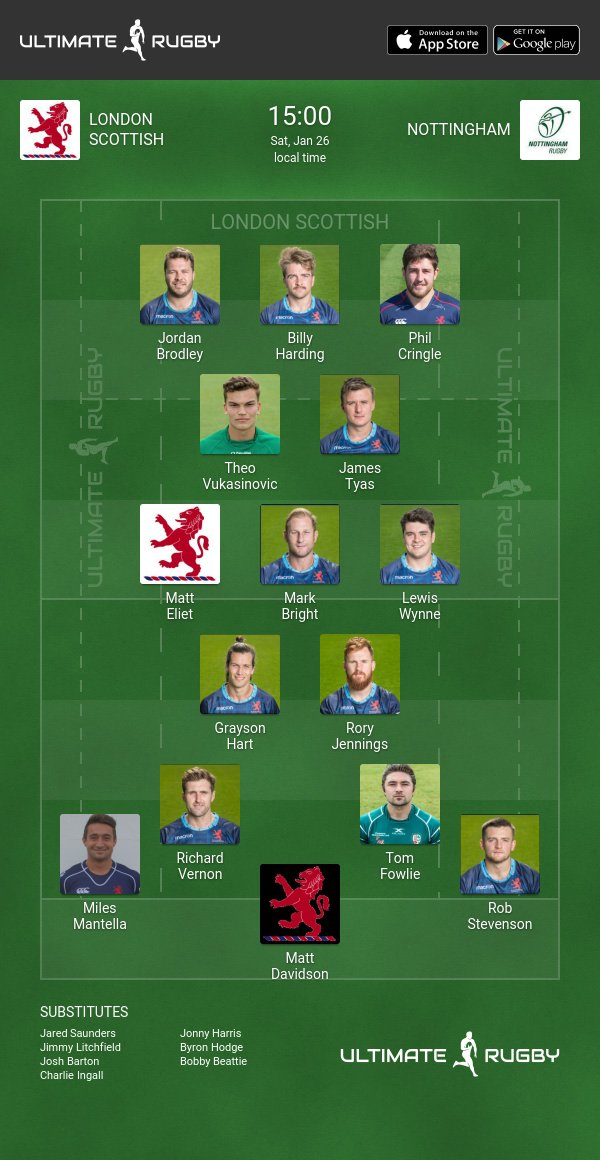 Having won the reverse fixture at home last year, Nottingham will be looking to find their first victory of 2019. 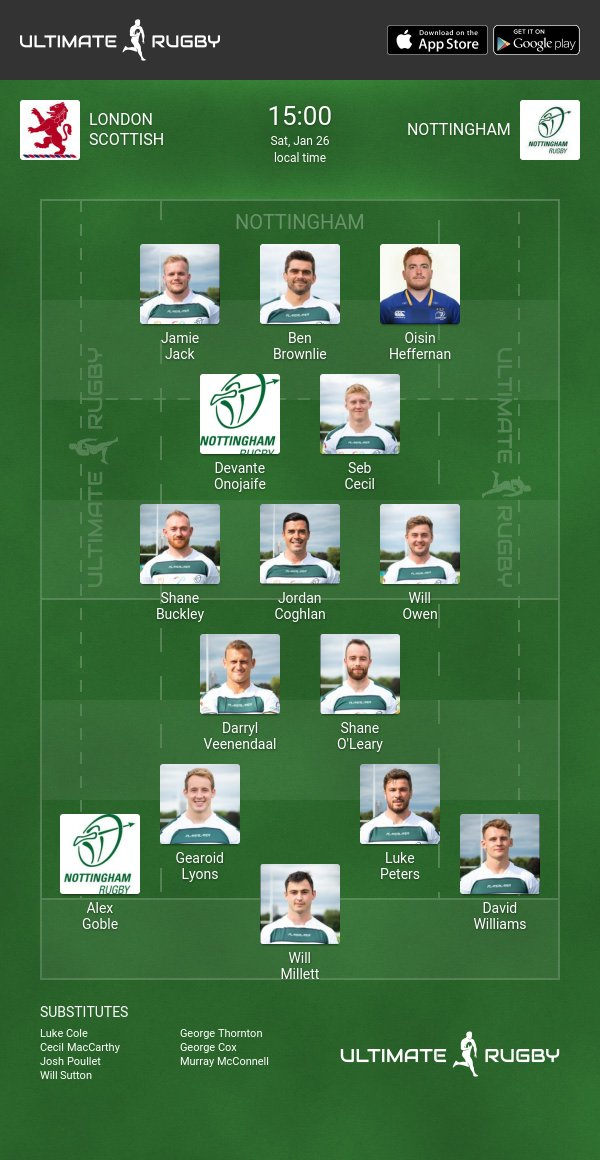 Jake Schatz and Conor Gilsenan continue their partnership from either side of the scrum, whilst Matt Rogerson faces his former club from number 8.

Ben Meehan is given the nod at scrum-half and partners London Irish Academy graduate Jacob Atkins, who starts at fly-half. 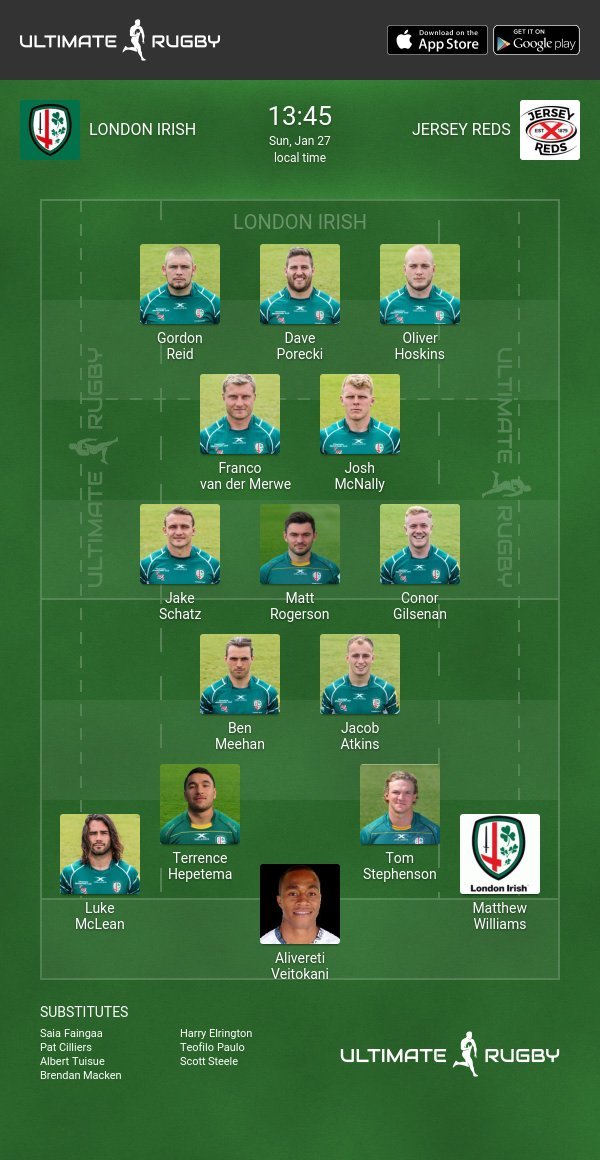 Jersey Reds have made two changes to the starting XV, both among the backs.

Tongan international centre Apakuki Ma'afu will miss out due to suspension after receiving a four-week ban this week for a dangerous tackle in the Bedford game, which means a return for Mark Best. And Brett Herron gets the start at fly-half, with Aaron Penberthy switching to the bench in place of George Eastwell. 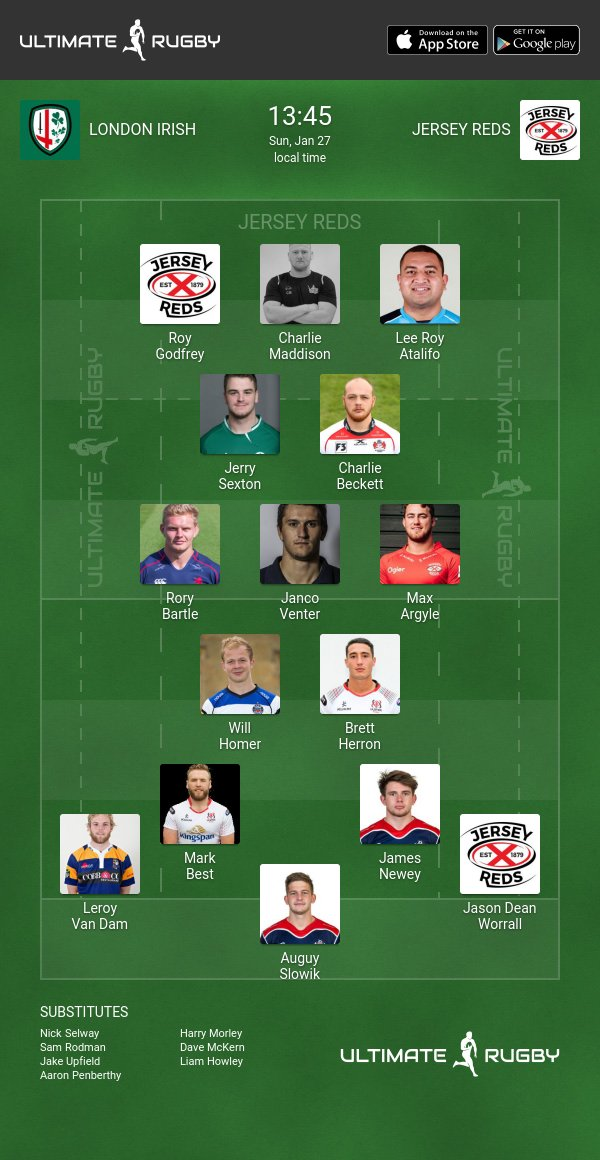 Following trips to Yorkshire Carnegie and to Coventry, the Cornish Pirates will this Sunday end the month with a welcome home match against Hartpury RFC.

Although the Pirates starting backs are the same as featured at Coventry last weekend, there are though several changes in the forwards. Selected in the back-row are flankers Matt Bolwell and Dan Lee, plus No. 8 James McRae. Danny Cutmore will partner skipper Brett Beukeboom in the second-row and Tom Concu is named at tight-head prop. 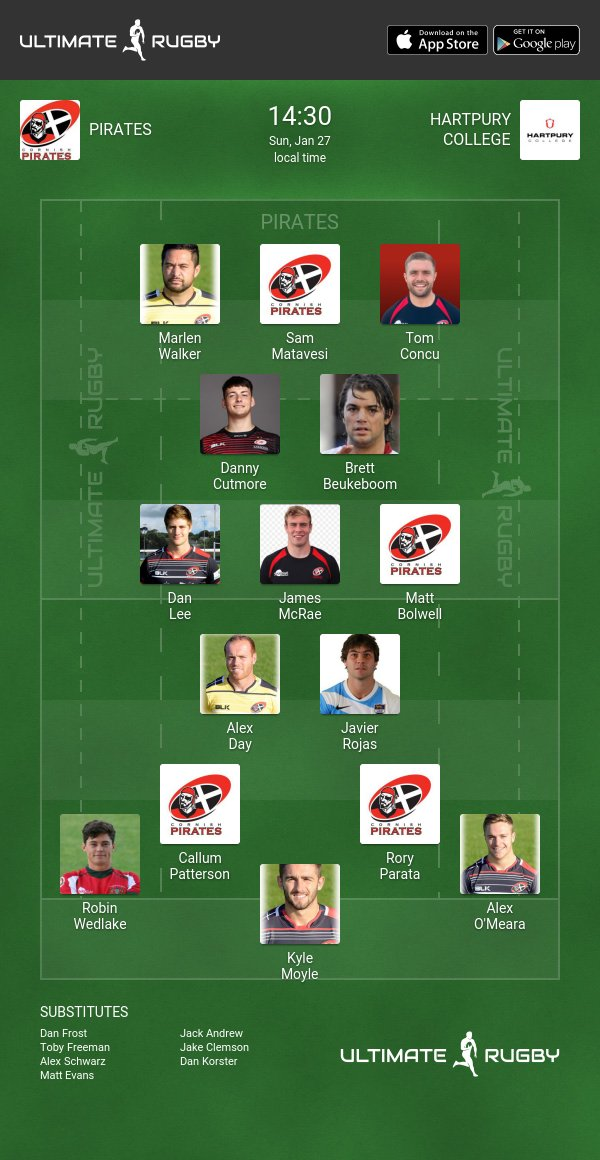 Hartpury team sees Sam Leeming return at 10, where he is partnered by Harry Cochrane.  England Under-18 centre, Jack Reeves, gets another taste at this level, while Ed Sheldon is chosen on the wing.

The pack is also re-shuffled.  Mike Flook and Worcester's Joe Morris are the starting props and Bristol lock Ehize Ehizode is also included after coming off the bench last week.

Iain Grieve is absent from the back row, making room for Mat Gilbert. 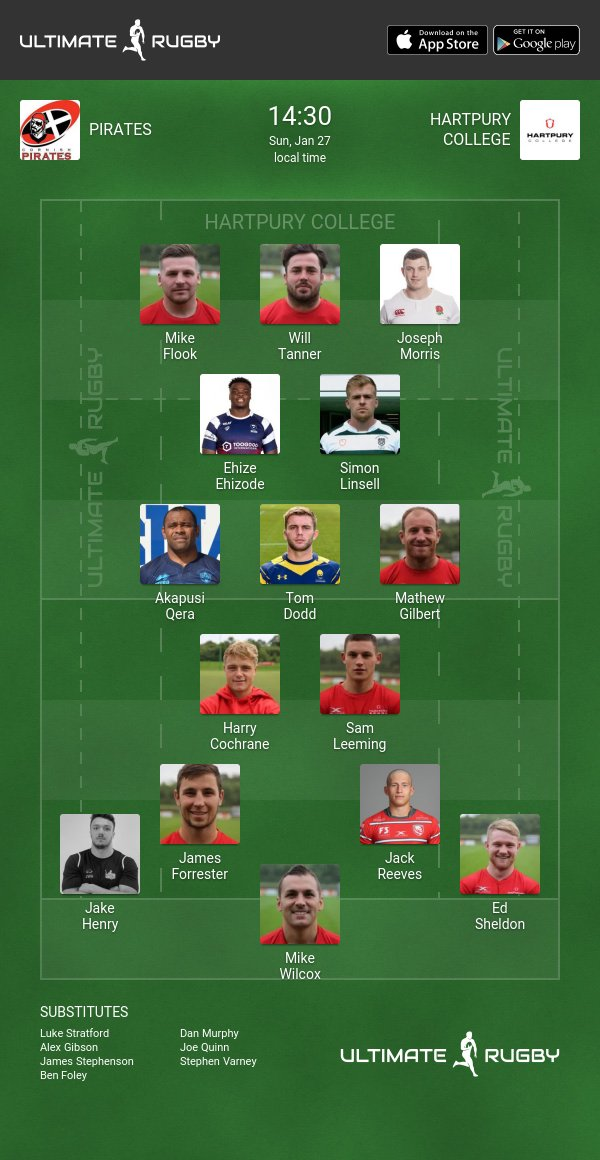 Yorkshire Carnegie Director of Rugby Chris Stirling has made three changes to the side that won at Richmond last Saturday for this Sunday's clash with Ealing Trailfinders at Emerald Headingley.

Winger Elijah Niko returns to the starting line up with George Watkins reverting to the bench and scrum half JB Bruzulier gets the chance to start this week with Sam Wolstenholme hoping to make an impact as a replacement.

In the forwards, there is just one change from last week with Marc Thomas returns to loose head prop with Nic Mayhew a replacement this week. 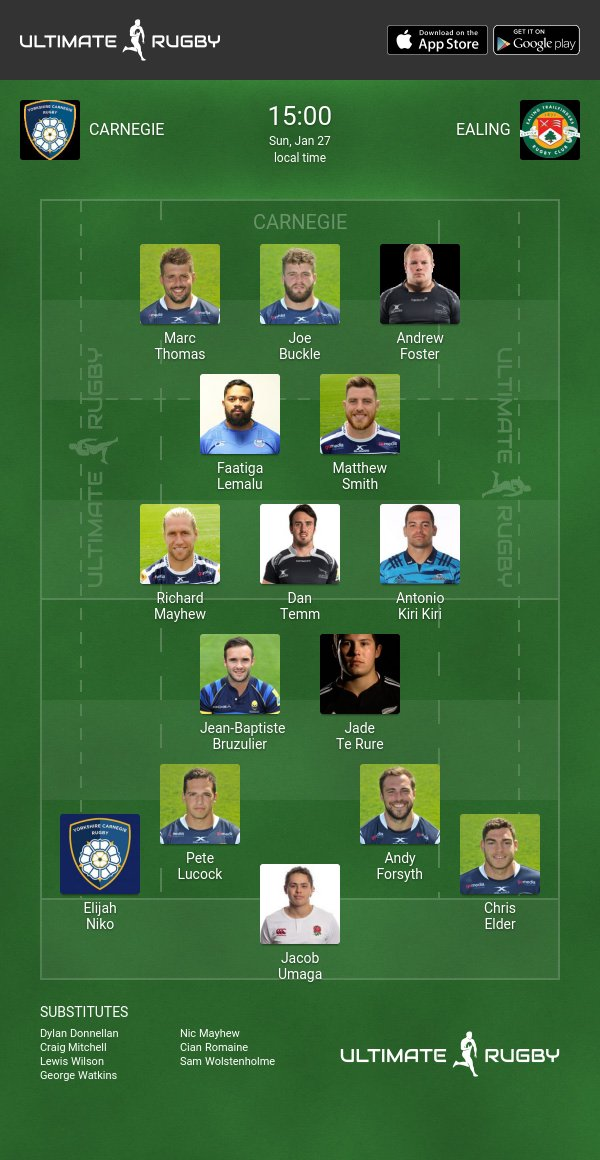 Ealing Trailfinders have made four changes to the starting line-up as the West Londoners look to build on the victory over London Scottish last weekend with two changes up front and two to the backs.

Jordan Burns and Laurence May will start as a new-look half-back combination, whilst Harry Sloan and Lewis Jones maintain their midfield partnership. James Cordy Redden, Will Harries and Peter Lydon will operate in an unchanged back-three. 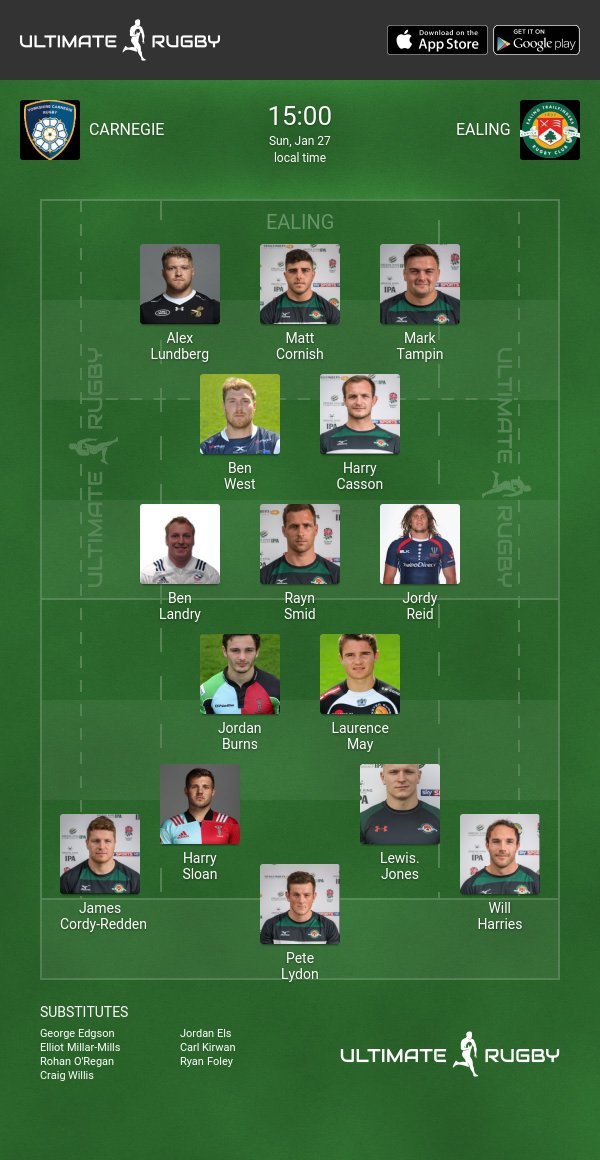