Damian de Allende is set to make his Champions Cup debut for Munster this weekend as the Irish Province kick off their campaign at home against Harlequins.

De Allende joined Munster after a short stint in Japan following the Springboks' successful Rugby World Cup campaign and the centre made an immediate impact and help his new side reach the PRO14 semi-finals last season as well as an unbeaten run in the same competition this season.

When asked about his views on the Championship Cup the 29-year-old said: 'I’ve watched more than a few games, not just one, but quite a few of them. When I watched the games, it was very close to international standard, and I think the intensity of the games and the physicality of the games was very… It was very physical, and the games were quite fast, and there’s obviously a lot less room for error, but it was incredible to watch those games live on TV. I’m just looking forward to the challenge, to experience it first-hand on the field, and it would be nice to experience it to a sold-out Thomond Park, but hopefully, we’ll get there soon.

It has been a perfect start in the PRO14 for Munster with seven wins from seven but the province is aware that the level of competition will take a step up on Sunday as they welcome Premiership outfit Harlequins to Thomond Park.

"I think we’re all ready to take that next step up," De Allende said at the launch of the Champions Cup.

"I think, with getting the Irish guys back next week, I think when they come back into the squad, I think they’ll appreciate it a lot more because there has been a lot of hard work put in."

"And obviously, coming back from the international squad, you want guys to obviously stand out and take responsibility. But I think when they come back, they’ll actually just get a nice feeling and I know they will add a lot more to our squad than what we have already.

"So, hopefully, we can just keep the momentum going, and obviously, we’ve got lots coming up, but we’re all just looking forward to the next challenge, and we can’t wait for this next block of games to start."

Harlequins head to Thomond Park of the back of consecutive victories having beaten Northampton Saints and Gloucester with Paul Gustard's side only loss in the 2021/22 Premiership season coming at the hands of Exeter.

However, Quins will be without their Springbok centre with Andre Esterhuizen ruled out through suspension.

Munster and Harlequins have met seven times before in the Heineken Champions Cup, with the Irish province winning each of the last six matches; five of their previous seven clashes have been decided by a single-digit margin

Quotes from the two camps:

"I think we’re in a good place. I think it’d be unfair to say that our performance against Exeter Chiefs reflected in the scoreline. We were, I think, 12-3 at 71 minutes. Unfortunately, we committed too many infringements – or were deemed to commit too many infringements, and they, obviously, scored three late tries, including one at the last whistle of the game. So, before that, we were competitive against the European champions and Premiership champions, and as Bath found out, they’re not a bad side. So, I don’t think the scoreline reflected where we are on our journey."-  Paul Gustard on Quins' first two games of the Premiership season

"We’ve had a good start to the season. Some very difficult opponents that we’ve faced in teams like the Scarlets, Edinburgh, Cardiff and Glasgow. We’re really happy with the way that we’ve used our squad and really excited to get our national players back, and now Europe is right in front of us. TheChampions Cup is a very special competition to Munster Rugby, and it’s a different format this year." - Johann van Graan on Munster's start to the 2020/21 PRO14 season and their readiness for the Champions Cup

- Munster are unbeaten in their last 15 home games in the Champions Cup (W14 D1), keeping their opponents to seven points or fewer in four of the last five.

- Harlequins have won only one of their last nine away games in Ireland in the Champions Cup (L8) but three of their last four defeats there have come by a margin of just one point.

- Munster were the only side not to score a try in the opening quarter of a match in the Champions Cup last season, however they conceded just one try in that same period, the joint fewest of any side (level with Montpellier). 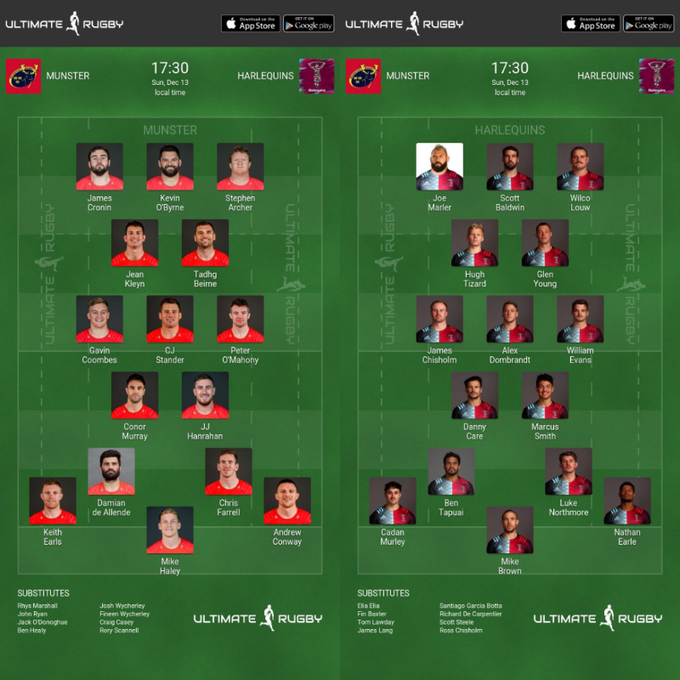