Jones has included 22 players who played at the 2019 Rugby World Cup in Japan last year and eight uncapped players.

Of those uncapped players Tom Dunn, Ben Earl and Ollie Thorley have been involved in previous England squads while Fraser Dingwall, George Furbank, Alex Moon, Will Stuart and Jacob Umaga are called up for the first time.

In addition to the 34 players, Josh Hodge, who plays in the Greene King IPA Championship, and Alex Mitchell have been called up as apprentices and will only train with the squad.

Jones said: “The Guinness Six Nations for us is all about raising the standards in terms of the way we prepare, tactically and physically how we play the game, and the way we come together off the field.

“But our first task is beating France in France and that is the only game we need to worry about. We will begin our preparations in Portugal, get a bit of sun, some warm conditions and get ourselves physically and mentally right for the game.

"The first three days will be about getting organised. We have got players from 11 clubs so we need to get everyone on the same page quickly, spend a lot of time working on our togetherness and then by Tuesday next week we are in Test preparation for France.”

On his selection Jones said: “It is always about winning the next game so we have picked the best squad available. At the same time we wanted to bring some young players in because we need to keep building our depth so for those new players it is an exciting opportunity for them.”

England will assemble at Pennyhill Park on Wednesday and travel to Portugal on Thursday ahead of their first match against France in Paris on Sunday 2nd February. 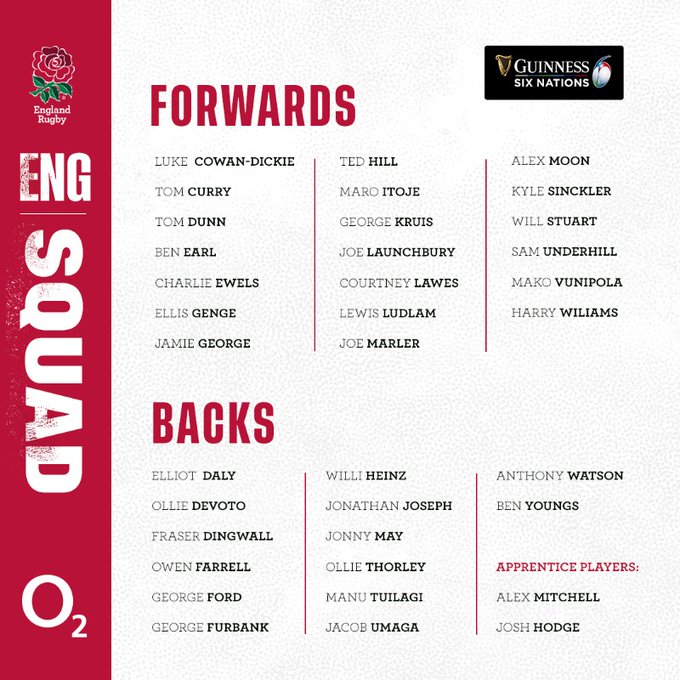