Gatland rallies Lions as Sharks take second bite at tourists
The British and Irish Lions and Sharks teams that clash in Pretoria on Saturday will bear little resemblance to those from the midweek game.

Warren Gatland has told his British and Irish Lions stars to keep "rolling with the punches" in South Africa as another clash with the Sharks arrives.

On their turbulent tour, the Lions were due to face the Bulls on Saturday, but several COVID-19 cases in the Pretoria team's ranks meant that game had to be called off.

Into their place come the Sharks, the side that the Lions crushed 54-7 on Wednesday in their second match of the tour.

The shift of venue from Ellis Park to Loftus Versfeld will be one notable change, and in terms of personnel it will be a distinctly different match to the first meeting, with the Lions making 13 alterations to their starting line-up and the Sharks also electing for near wholesale change.

Wing Anthony Watson makes his first start on the tour, and his England team-mate, hooker Jamie George, captains the side. Centre Elliot Daly and wing Duhan van der Merwe are the only players to keep their place in the team.

Coronavirus cases in the England camp, as well as in the ranks of South Africa who have had to call off a match against Georgia, have seen doubts raised about whether the Tests later on the tour will go ahead as planned.


Gatland said: "It's obviously been a slightly turbulent week, but we remain determined to keep rolling with the punches.

"In many ways, the challenges we've faced this week have strengthened our resolve to do everything we can to overcome the challenges created by COVID.

"The feeling in the camp on Wednesday night was just to give it a crack – I was really proud by how everyone reacted, particularly the matchday squad who would have never prepared for a game like that before.

"Saturday is another opportunity to see how the boys go and for us as coaches to try out a few more combinations ahead of the Test series.

"I have long been an admirer of Jamie's leadership skills, so I am delighted to name him skipper.

"We want to pass on thanks to the Sharks boys for fronting up and going again on Saturday. The spirit of rugby and a great chance for them to have another shot at us." 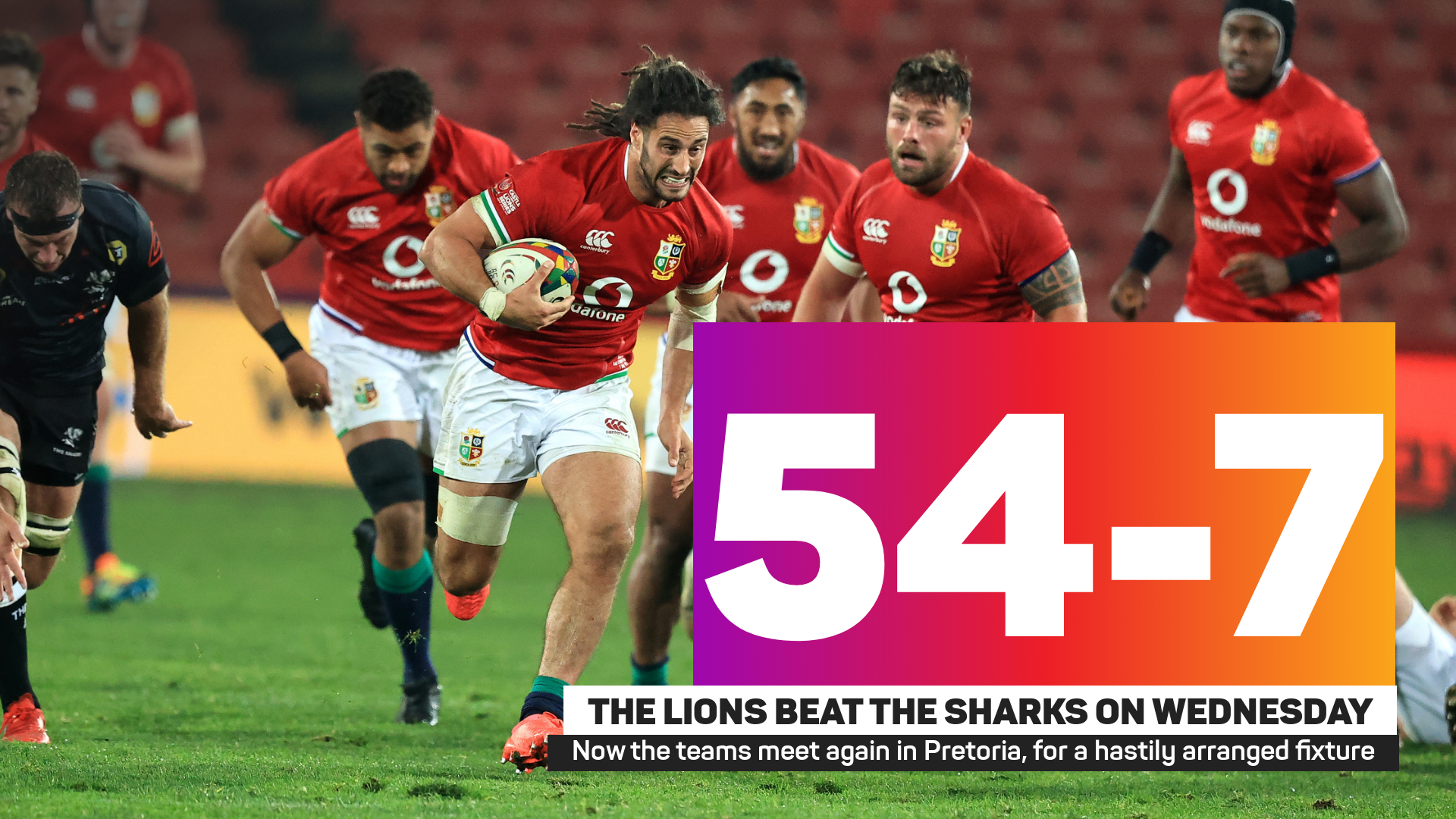 WATSON GETS CHANCE TO IMPRESS

The Lions have a tasty back three for this game, with Watson joined by Liam Williams and midweek hat-trick hero Duhan van der Merwe. Watson played all three Tests on the 2017 tour of New Zealand, making a big impact in the drawn series, and looks highly likely to start against South Africa too. Getting some good minutes in now should bring benefit later, and with few backs options on the bench, Watson looks to see plenty of action against the Sharks.

GEORGE CAN STAKE A CLAIM

After catching the eye against Johannesburg's Lions last weekend, George gets another opportunity to impress Gatland, this time as skipper. The coach's warm words underlined his appreciation of the Saracens hooker, who has Ken Owens and Luke Cowan-Dickie as rivals for the number two Test shirt. It is up to George to show leadership skills this weekend, as he attempts to play his way into the side that takes on the Springboks.

- The Lions' win on Wednesday was their biggest ever against the Sharks/Natal. Overall the British and Irish Lions have won 11 of their 12 fixtures against the Sharks/Natal, the exception being a 3-3 draw back on the 1924 tour.
- The Lions have scored 50-plus points in each of their last two matches. They have never recorded a half-century of points in three consecutive games.
- Phepsi Buthelezi made 20 carries against the Lions on Wednesday, the most by a Sharks player since May 2015 when Bismarck du Plessis made 20 against the Highlanders in a Super Rugby fixture. He is the only member of the pack thart started on Wednesday to stay in the team for Saturday.
- Josh Adams sits this game out, after being the the only player to feature for every minute possible with the Lions this year. Adams has scored eight tries, twice as many as any other player, while he also leads the way for carries (26), metres gained (238) and defenders beaten (13).
- Elliot Daly has assisted three tries for the Lions in his two games, more than any other player in the squad, with those three assists coming from just nine passes in total.