New Signings - Will Make the Difference for the Warriors

The Bristol game was a big test.  It was a big test that we passed with flying colours.  In part down to some new signings making instant impact.

The Anglo-Welsh Cup comes at a time when senior players are either with their respective countries or having bit of a rest, so it is time for the young guns to shine. 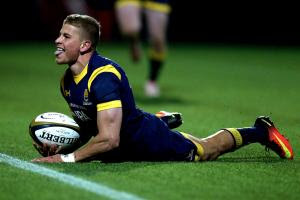 It wasn't all down to young guys or new signings and I know that we have not just played well against Bristol, but what a story - Bristol DoR is suspended, their players are now having to prove a point, demonstrate to the new management that they should be in the team.

The temporary managers pick the first team for an Anglo-Welsh Cup game... our Academy, young fringe players and first time starters go on and win.  I loved every moment of it.

What more can we expect from our recent signings and young stars?

I get it now, yes it has taken me a while and yes I am sure it was obvious to the rest of the Warriors fan base, but I finally get it.  I can now see what Ben T'eo is going to bring to the party.

Unlike Bristol, we are using the Anglo-Welsh cup to bring through players.  We have plenty of injuries still and T'eo is away with England [As will I be for the South Africa game].

Ben T'eo - Rough diamond?  Very individual style of play?  Not fully recovered from injury?  There are many possible reasons for his less than spectacular start at Sixways, what ever it is it has now gone away.  He is a star.

The England centre was a big gamble in some ways.  Although clearly talented and getting great reviews in Ireland he was very much an unproven commodity in rugby union, no knowledge of Premiership rugby and yet we broke the bank in bringing him here.  I think that move is going to pay off.

Max Stelling - OK not a new signing, but his recent performances after a season in the wilderness is like getting a new player.  I do not think we will ever fully understand what he did to make Dean Ryan banish him, but he is back and with some style.

This week Max is playing in the centre with Andy Short.  They both have the ability to rip defences apart, they can also both defend like forwards at times. 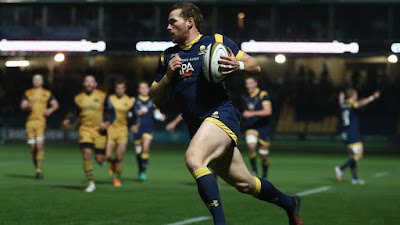 Another solid performance from Max and I am sure he will be contending with T'eo, Willison and Olivier for the 12/13 shirts.  Though just writing those names makes me realise how tough a job he has on his hands.

Michael Dowsett - Does this lad of the skinniest legs in rugby union?  We have found yet another EQP from the Southern Hemisphere leagues and going by his first performance he could be another gem, just like T'eo.

The boy was clearly trying too hard in the first half of his debut but his face said it all when he scored that try.  Pretty quick, solid kicking and has already found the try line.  Pretty good recruitment in my books.

In three seasons at the Brumbies he only played 422 minutes, 22 games, 4 starts and scored 1 try.  His current stats are played 61 minutes, 1 game, 1 start and 1 try - looking better already.

Wilhelm van der Sluys - This guy is very much an unknown quantity.  Brought through the Western Province system he has only made 29 appearances in his career, since 2012.  The guy is a South African lock, seemingly light weight at "only" 16 stones but his show reals indicate he carries that weight well and gets around the pitch.

He is on trial with and and has gone straight into the team at lock so either he has already been able to show his talent or we are desperate to rest the likes of Barry, DOC and CSW.

Jackson Willison - he is another one than took a little time to impress.  I had obviously heard of him before and seen his clips but I wasn't expecting all that much to come from him.  He then clicked with Olivier and followed that up by demonstrating an understanding with T'eo.

Am I reading too much into it or are we yet to see T'eo and Olivier play well together?  Is it possible that, though in my opinion Ben and Wynand are better players than Jackson, Willison will get the most caps as he partners better with the other two?

This is quality from Jackson:

What ever happens we have three great centres fighting for two shirts with plenty of talent behind them to keep them honest.

Jack Singleton - Any hooker that can score 4 tries at age grade international level has something about them.  We cannot really claim to have brought him through rugby as most of his academy time has been with Saracens, but we have certainly added the cherry to the cake.  Great form in A league games, glowing reports from England and now putting in very confident performances for our first team, this guy is going to be pushing for the Warriors #2 shirt very soon.

Huw Taylor - This guy has already made 12 senior appearances and has been at the club for a while. The guy is a winner, he was part of the B&I Cup winning squad, he made it to the final of the A League with our Cavaliers and won the Under 20 World Championship this year.

The club see him as a leader and are expecting great things from him.

EQP funding is having the desired affect at Sixways and we as rugby fans are going to gain massively.  Not only are we going to generate £150k extra rugby funds but we get to see English qualified players running on the Sixways pitch.  We are developing our academy players and recruiting EQP guys to add to the team.
Catch more of Warrior Phill's blog here, and for all things Worcester on twitter at @RugbyWorcs.