How things stand after Round 3 of Super Rugby AU

The Brumbies travelled to Sydney and squeaked past the Waratahs 24-23 in a good, competitive match-up.

In Brisbane, the Reds strangled a gallant Western Force outfit to cement their place at the top of the table, albeit by a single point, ahead of their Canberra foes. 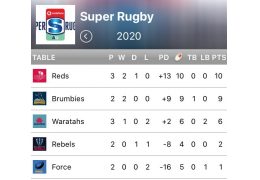 The Brumbies travel to Perth for their Round 4 clash against the Force who showed good try-scoring ability in Round 3. The Brumbies will need to pay special attention to closing down talented runners such as Byron Ralston if they hope to come away with another victory.

Meanwhile, the Rebels will host the Waratahs in Melbourne after enjoying a bye in Round 3. Both teams will be anxious to post a win after the Rebels only managed a draw against the Reds in Round 2 and the ‘Tahs have only emerged victors once so far, when they downed the Force 23-14 in that same round.