How things stand after Round 4 of Super Rugby AU

The Brumbies cemented the notion that they are the form team in Super Rugby AU after they systematically crushed the Western Force 24-0 on the weekend while the Rebels proved too strong for the Waratahs, Marika Koroibete dotting down late in the second half to take the score to 29-10. 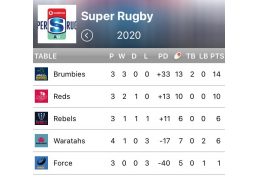 The Brumbies are looking good after 4 rounds, having put together a four-match unbeaten streak, and lead the table with a total of 14 points – four more than the second-placed Reds. Said two teams will clash in Round 5 in Canberra, a result which might see the Brumbies stretch their lead or, if the Reds are on the ball, share the top of the table with the Brisbane-based team.

The Rebels and Waratahs are currently level with 6 points each while the Force, struggling to find their feet in Super Rugby after a three-year absence, are in last place with only a single point to their name.

The Force host the Rebels in Round 5, the latter looked strong this weekend in their dismantling of the Waratahs and their fans will hope they have now found some momentum to carry them forward.