The November Test window only officially opens next weekend but we were treated to a thrilling round of test rugby this weekend.

The weekend kicked off with the All Blacks facing Japan in Tokyo and was completed at Soldier Field with the USA facing the Maori All Blacks.

We picked our team of the weekend following all the action:

Larmour strolls into our team of the week following an outstanding performance against Italy.

His showing at Soldier Field led to Italy coach Conor O'Shea comparing him to All Black legend Christian Cullen.

The World Breakthrough Player of the Year nominee ran in a hattrick of tries, assisted another and racked up over 200 running metres

North scored this incredible solo try to inspire his side to an impressive 21-10 victory over a tough Scottish side.

North was expectional throughout the game whether is was snuffing out potential threats on defence or providing his side with front foot ball.

Sbu Nkosi also pushed for a place in the side but North ultimately claims the #14 jersey.

The 2017 British and Irish Lions player of the Series enjoyed a stellar return to test rugby this weekend as Wales claimed the Doddie Weir Cup.

Davies and his centre partner Hadleigh Parkes bossed proceedings at Principality Stadium and the 30-year-old was rewarded with a try in 48th minute.

'Fox' made all 9 of his attempted tackles, made 47 running metres and beat 3 defenders.

He did have competition for the jersey with Garry Ringrose and Matt Proctor impressing this weekend.

Laumape's hattrick sees him beat off stiff competition from Damian de Allende - who was excellent against England at Twickenham.

Pace, power, skill and vision, Laumape's game against Japan had everything!

Laumape's performance in Tokyo will have Steve Hansen pondering whether he made the right decision in leaving the man dubbed as the 'minibus' out of his squad to tour Europe.

His first try was down to his positioning and the bounce of the ball which favoured him. His second was from a set piece inside the 22 where he burst through the defence and looked to offload but surprised when he bundled over the last defender and ran in under the sticks. His third and final try was a lovely grubber down the blindside that he regathered and to score from a relatively non-threatening attack. 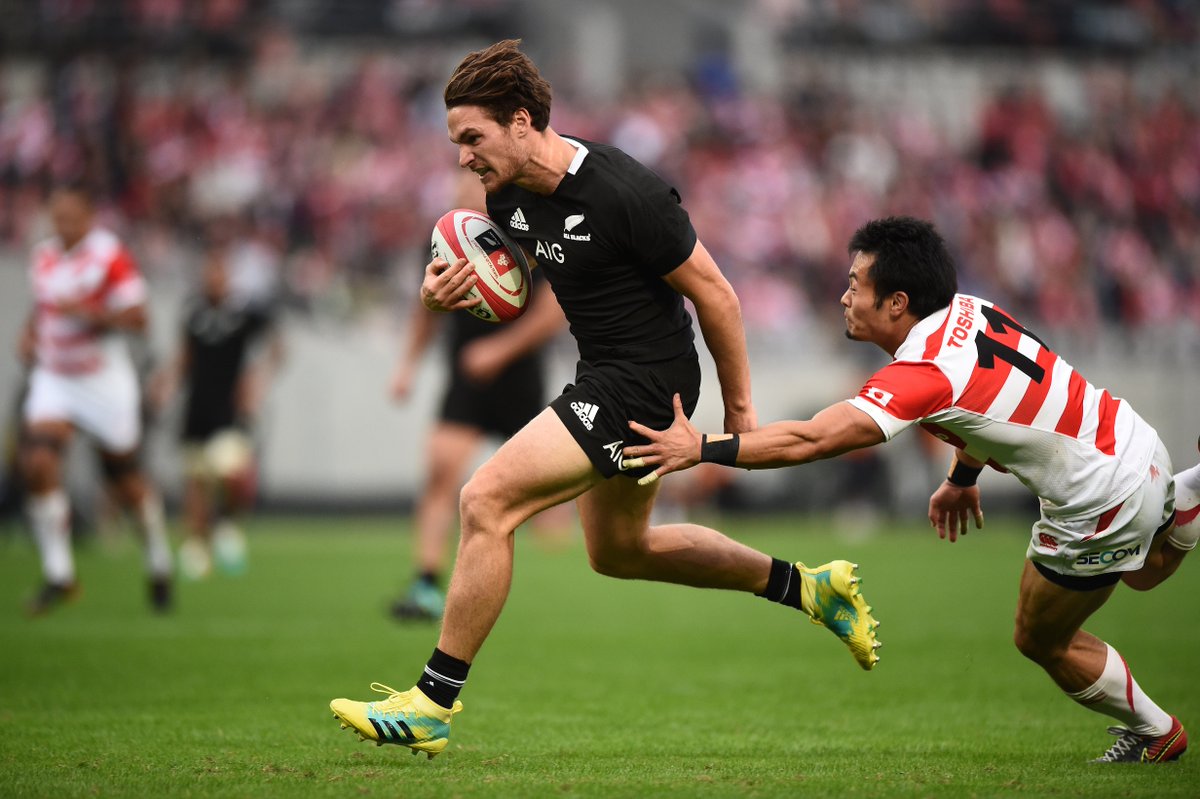 The Crusaders' try-scoring machine made an immediate impact in the black jersey scoring two tries and assisted another having just been on the pitch for 40 minutes.

Albeit against Japan, the 23-year-old was simply superb and certainly put his hand up for more time in the All Blacks squad and potentially a spot on the plane to Japan next year.

Bridge showed off his rapid pace and his wide range of skills on defence and attack and can be a real asset to the All Blacks with his ability to play across the back three.

England's Jonny May deserves a mention for his efforts against the Springboks with Japan's Kenki Fukuoka also putting a fine shift.

Given another start in the All Black jersey and Mo'unga certainly disappoint as he delivered a fantastic performance and continues to ply the pressure on Damian McKenzie as the All Blacks second choice flyhalf.

Mo'unga scored 22 points, assisted a try and beat 7 defenders to make 47 running metres but it was the way he dictated play that earns him a place in our side.

He seemed to pick the right pace just about every time he got the ball and his kicks for touch put the All Blacks in brilliant positions to attack from.

McGrath strived with quick ball in the second half as Ireland took control of the game against Italy at Soldier Field.

He made clever and quick decisions and controlled the game well with Joey Carbery and Ross Byrne.

An excellent performance by Wilson who got stuck into a massive Springbok pack on Saturday. He was aggressive and busy throughout the game making plenty of tackles, carries and got stuck into the rucks.

Wales' Ross Moriarity is unlucky not to make the side while Akira Ioane impressed for the Maori All Blacks.

Tackles, carries and turnovers! Tupuric was exceptional against Scotland and was rewarded with the man of the match accolade and a well-deserved place in our team of the week.

Elsewhere, Dalton Papalli'i had a promising test debut while Tom Curry made a strong claim for a place in the side with an injury cutting his game short. Scotland's Hamish Watson was the standout player for Scotland this weekend as well. 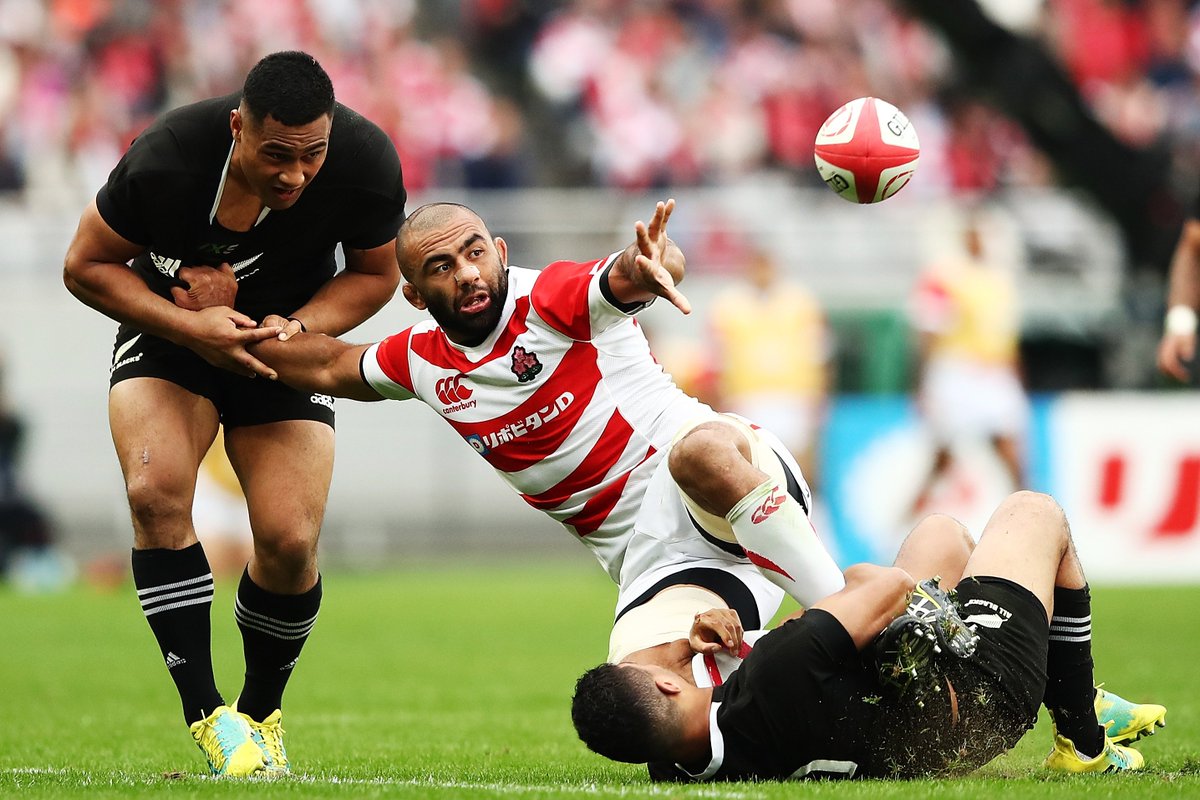 Leitch's performance against the All Blacks can be quickly summed up by the old cliche of 'leading from the front'.

The form Chief got stuck into some of his former teammates and disrupted a lot of the All Blacks attacks.

He showed some slick skills with the ball in hand and carried strongly throughout.

Duane Vermeulen had a strong game for the Springboks on the side of the scrum while Dan Lydiate completes the hattrick of Welsh back rowers who had solid games this weekend.

Pieter-Steph du Toit has enjoyed a fantastic year in the Green and Gold jersey this year and had another strong game despite his side going down to England at Twickenham.

Du Toit was busy as ever making more carries than any other forward in the game and finished with the game with 13 tackles - just two less than Maro Itoje's game-high of 15.

Maro Itoje was impressive despite spending 10 minutes in the bin while Isaia Walker-Leawere is unlucky not to get into the side after scoring a brace against the USA.

Beirne couldn't have asked for a better starting test debut as he dotted for two tries against Italy.

The double try scorer also did his core roles well as a second rower making 11 carries and all 7 of his tackles.

He was a real threat at the breakdown as well forcing Italy into penalties and made 33 running metres.

Not bad for his first Irish start!

An impressive performance at scrum time - especially in the first half - forced Eddie Jones' hand this weekend with Alec Hepburn getting the call after the break.

The iinjury-riddentighthead looks to have recaptured his form that earned him a test call up at the age of 21. His opposite number on the day Kyle Sinckler also had a strong game despite struggling at times against Steven Kitshoff while Andrew Porter effectively filled Tadgh Furlong's void. Finally, Tyrell Lomax deserves a mention for his efforts for the All Blacks on his debut.

In a weekend that saw the likes of Malcolm Marx and Dane Coles in action, Wales' Ken Owens shone brightest out of the talented crop of hookers.

His lineouts and scrum work was on point as his side maintained a 100% success rate in both departments.

He was also busy around the park in general play making 13 tackles, 9 carries and a turnover.

A strong performance by the Irish loosehead at scrum time and in general play. He hit double digits in the carries and tackles made categories and edges Springbok loosehead Steven Kitshoff for a spot in our team of the weekend.