PREVIEW: Gatland looks for Lions to stake Test claims in Stormers clash
Warren Gatland will sit down with his coaching team in the days after the Stormers clash to formulate a team to tackle the Springboks.

The British and Irish Lions will aim to protect a proud record that goes back almost a century when they tackle the Stormers on Saturday in Cape Town.

It was 1924 when the Lions last lost consecutive non-Test matches on a tour of South Africa, and Warren Gatland's side head into the weekend on the back of a midweek defeat.

That loss on Wednesday came at the hands of a strong South Africa A, with the Lions going down 17-13 to a team that featured several World Cup winners.

Coach Gatland has named a wholly new XV for the tussle with the Stormers, and he insists places for the first Test against the Springboks next weekend are very much up for grabs.

Asked about scrum-half Ali Price, who has Gareth Davies and Connor Murray as competition for the number nine Test jersey, Gatland urged the Scotland international to grasp his chance against the Stormers.

"I'm pleased with the way he's gone. He's kicked well. He's got that left foot variation. He's made a couple of nice breaks and he's defended well too," Gatland said.

"He's had a really good tour so it's a really good game for him to play on Saturday and give him an opportunity to put his hand up."

Alun Wyn Jones could remarkably have a part to play too, having recovered from the dislocated shoulder he sustained against Japan at Murrayfield last month.

Test rugby's most-capped player, initially designated as captain of the Lions for this tour, will be on the replacements' bench against the Stormers.

Gatland said: "I spoke to Alun Wyn and spoke to the medical team about the ability to put him on the bench. We felt if he was going to be in contention next week that he needed to have a hit-out to prove 100 per cent he was fit and ready to go."

A minor ankle knock means Welsh fly-half Dan Biggar sits out the Stormers clash, as Gatland warned there was a risk he would be "sore" afterwards.

"If it was a Test match, he would have fronted up and be ready to go," said the head coach added.

The Lions will be on their guard against a team who boast, in wing Edwill van der Merwe, the leading try-scorer from South Africa's Rainbow Cup competition this year. Van der Merwe bagged five tries, with no other player scoring more than three, and he also recorded the best average gain per carry of any player to run with the ball on more than five occasions in the competition (11.2 metres per carry).

Across their five games in that tournament, the Stormers won twice and lost three times, but each match was decided by a margin or four points or fewer, and they averaged the most tackles per game of any side (130) and had the best tackle success rate (86 per cent). 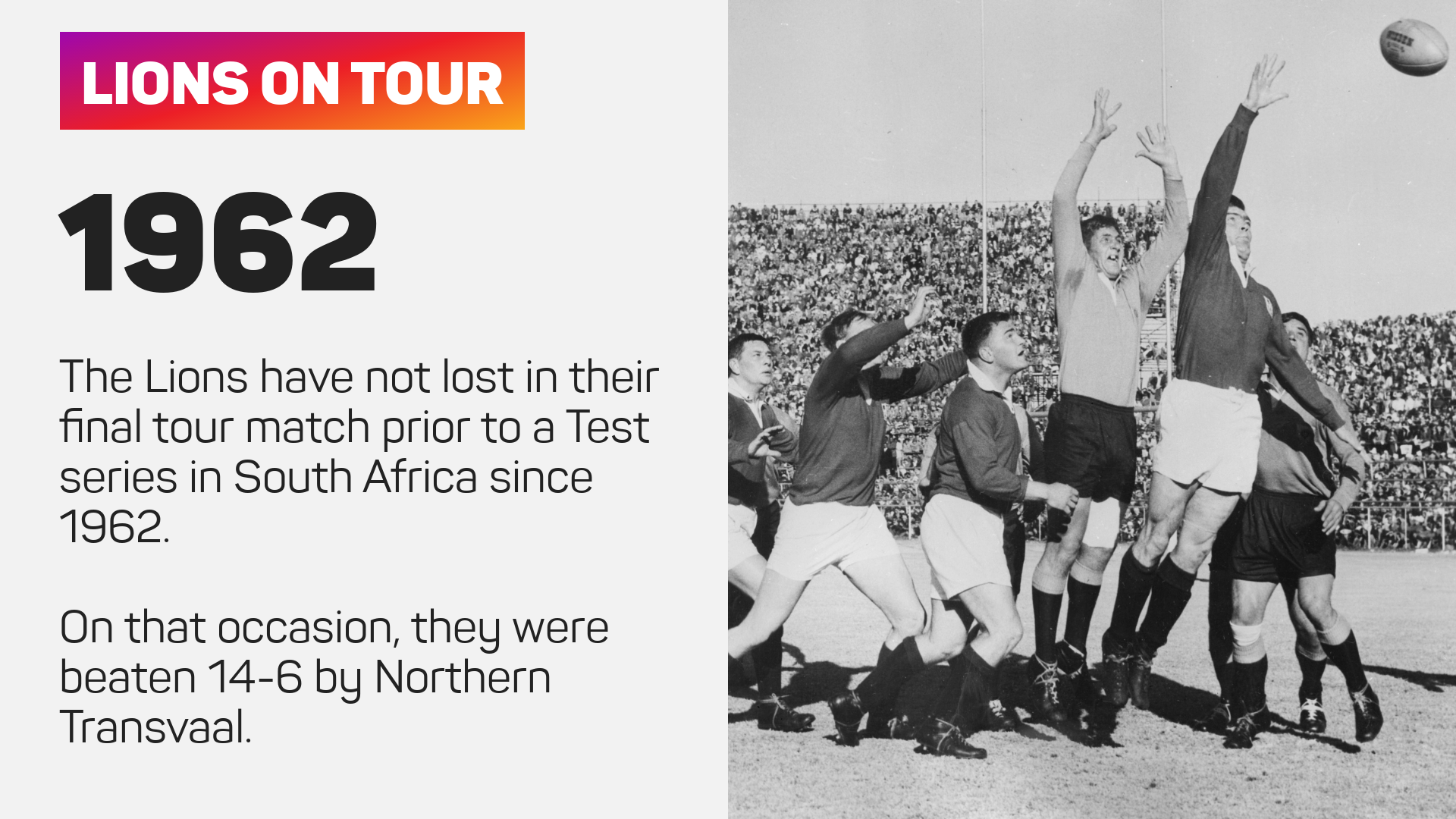 FINAL CHANCE TO STAKE A CLAIM

Gatland confirmed a combination of Biggar at 10 and Owen Farrell at 12 remains an option for the Lions for the Test series. He said: "We haven't had that opportunity to play those two together, the way that things have gone. First thing is we want to see how the midfield combination with Robbie [Henshaw] and Elliot [Daly] goes as well.

"We have got other options and that 10-12 combination ... we know with his experience that Owen could easily fit into that 12 position. It's not something that, because we haven't used, it we wouldn't potentially consider."

Marcus Smith has a monumental opportunity this weekend, selected to start at fly-half in the final match before the Tests get under way. Fresh from an England Test debut, it is suddenly not beyond the bounds of possibility that the 22-year-old international newcomer could come into the reckoning for next Saturday.

His opposite number will be a familiar face, with former Harlequins club-mate Tim Swiel selected at number 10 by the Stormers.

– The British and Irish Lions have never played the Stormers but played Western Province on 16 occasions, winning the last seven of those clashes. They also played Boland on four occasions, the other feeder team for the Stormers (W4).
– In 2009, the Lions required a late James Hook penalty goal to secure the win against Western Province (26-23) at a wet Newlands. Tommy Bowe, Ugo Monye and Martyn Williams all scored tries for the tourists that day.
– The Lions have lost just one of their past 10 matches immediately prior to the first Test of a tour (2013 v Brumbies), not losing such a fixture in South Africa since 1962 against Northern Transvaal.
– Smith was the only player to evade more than half of the tackle attempts that were made on him in the Premiership last season, among all those who faced 50 or more such attempts. He also made more break assist passes (27) than any other player in the league and ranked second for try assists (15).