Scotland Head Coach, Gregor Townsend has shuffled his team to face France this weekend with full-back Stuart Hogg is the only player to be reselected in the starting Scotland side that lost 32-3 last week.

Scotland’s biggest stadium, Murrayfield, is poised for its 15th consecutive capacity crowd before which the national team aims to bounce back from their 32-3 defeat at the hands of Les Bleus in Nice last weekend.

Scotland Head Coach, Gregor Townsend, said: “Our first outing of the season was a disappointment and not reflective of the hard work our players have put in over the past two months

"France are a very dangerous side if you give them space and quick ball to play, which is what we allowed to happen on too many occasions last week. Our focus all week has been to remedy this and also create much more from our attacking game.

“It was a stark reminder of how tough things can be at international level if our standards slip.

"We expect our players to show a much truer picture of themselves this Saturday.

"France have selected another strong side so it will be a great challenge for us to deliver a much-improved performance.”

Scotland’s starting back division is bookended by familiar partnerships and British & Irish Lions, as Hogg is joined by Saracens and Glasgow Warriors wings Sean Maitland and Tommy Seymour for their 19th Test start as a trio.

Continuing the thread of familiarity are Racing 92 stand-off Finn Russell and Clermont Auvergne scrum-half Greig Laidlaw, who captains the side.

The pair will equal the starting partnership appearances of fellow Scottish Lions Gary Armstrong and Craig Chalmers (32) and will then be three starts short of equalling the record-holding half-back partnership of Greig’s uncle Roy Laidlaw and stand-off John Rutherford.

At the opposite end of the international experience spectrum is Scarlets number 8 Blade Thomson, who will make his long-awaited Test debut in a back-row featuring Edinburgh’s Hamish Watson and Glasgow Warriors’ Ryan Wilson for the first time this campaign.

The side is completed by a new starting midfield partnership of Glasgow Warriors’ 41-times capped Pete Horne and Gloucester’s Chris Harris, while Glasgow Warriors hooker Grant Stewart could make his debut if called upon from the bench. 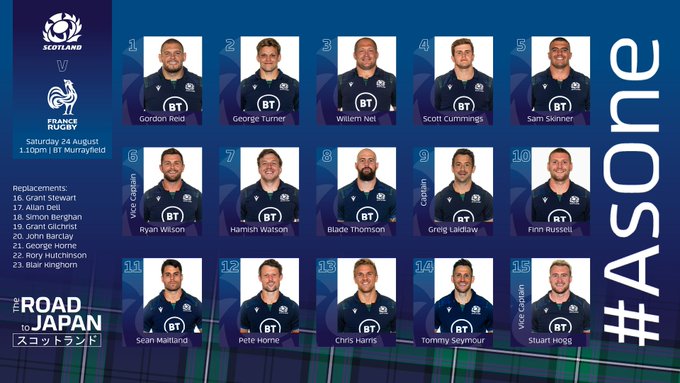