When the final whistle blew on Saturday the 25th of May 1996, the sight of the scoreboard reading Auckland Blues 45 – 21 Natal Sharks confirmed Zinzan Brooke’s charges as the first champions of Super Rugby.


As the elated men high-fived and embraced in jubilation on the field at Eden Park, it was an unknown fact then that they would lift the trophy again only a year later.

24 years on, the Blues of the 90s are still remembered and held in high regard all over the rugby-playing world and, when one looks at the team as a whole, their success is not surprising:

The entire starting line-up for the Blues, with the exception of inside centre Johnny Ngauamo, represented the All Blacks in their careers. Ngauamo played at international level for his native Tonga.

It is difficult to think of a more useful forward pack; an All Black front row featuring the powerful props Craig Dowd and Olo Brown flanking the legendary, wily hooker Sean Fitzpatrick. Workhorses Charles Rechelmann and Robin Brooke were more than effective at set-piece and broken play while the back of the scrum was occupied by the tireless trio of Andrew Blowers, Michael Jones and Zinzan Brooke. Jones and Zinzan Brooke, particularly, are still regarded as two of the best back rowers to wear the All Black jersey.

Zinzan Brooke was a mercurial talent; and rugby-obsessed number 8 who spent large parts of his free time with a pen in hand, drawing up plans for new moves on the field. A strong, courageous man and a natural leader who welcomed innovation, his players thrived under his leadership. 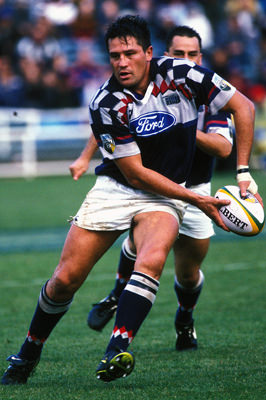 The backline was one of the most exciting that the franchise has ever produced. ‘Junior’ Tonu’u, at the time, was the best passer of a rugby ball in the world which allowed magical play-maker Carlos Spencer to ignite his own prodigious talent as well as that of his backs.

Solid on attack and defence, Ngauamo and Clarke made up a formidable midfield partnership while the likes of Jonah Lomu and Joeli Vidiri on the wings need no introduction as they were finishers second to none. At the back, pacey Adrian Cashmore took care of the high ball and harboured a healthy zeal for attacking play as well.

The team was coached by a young and ambitious Graham Henry who would go on to have one of the most decorated careers the game has seen.