Super Rugby Team of the Week - Round 12

Another entertaining round of Super Rugby action this weekend with the Jaguares claiming another win over New Zealand opposition, the Hurricanes made it 8 in a row, the Stormers remained unbeaten at home and the Sharks upset the Highlanders in Durban.

There were two standout looseheads this weekend with Steven Kitshoff starring for the Stormers in their local derby against the Bulls, while Tom Robertson was brilliant against the Blues.

Kitshoff's scrum dominance gives him the edge, he also made 7 carries, 7 tackles and assisted Wilco Louw for his try.

With Marx and Taylor having limited time on the field this weekend three other hookers stood out above the rest.

Riccitelli gets the nod over Andrew Makalio & Julian Montoya having put a big shift in against the Lions making 6 carries, 6 tackles and won 3 turnovers.

Montoya was excellent against a tough Chiefs pack while Makalio claimed a brace against the Rebels.

9 tackles, 3 carries, 2 turnovers and solid scrummaging in 57 minutes earns Tetaz the no.3 jersey as the Jaguares claimed their 2nd win over New Zealand opposition.

Tetaz just beat Wilco Louw to the starting jersey after the Springbok tighthead's strong performance against the Bulls.

Tuipulotu's excellent defence display sees him beat off the likes of Guido Petti & Vaea Fifita for the no.4 jersey this week.

The 25-year-old made 14 tackles without missing and made 6 carries. His lineout work was pretty tidy as his side secured 14 of their 16 lineout throws.

An extremely tough call at no.5 this week with Tomas Lavanini & Pieter-Steph du Toit both putting in outstanding performances but it is Fatialofa who gets the nod after he disrupted one of the best lineouts in the competition.

The Lions were only able to keep 69% of their own lineout throws this weekend with Fatialofa the main reason for their woes. He also made 8 tackles -without missing one - as well as 5 carries.

Schoeman was arguably the Lions best player against the Hurricanes making 21 tackles, 2 turnovers and dotted down for a try in the 58th minute of the match.

Schoeman's closest competitor for the no.6 jersey was Jagures flanker Tomas Lezana who made 12 tackles, 2 turnovers and 57 running metres from his 9 carries.

Savea had an outstanding game for the Hurricanes as his side claimed a 28-19 victory over the Lions in a replay of the 2016 Super Rugby final.

The busy flanker hit double digits in the ball carrying and tackles made categories. He put Matt Proctor into space before finishing off the Canes second try of the match.

His 80 running metres, 3 defenders beaten and 2 clean breaks see him edge out Michael Hooper, Jean-luc du Preez and Marcos Kremer who all had strong games for their respective sides.

Ioane makes the TOTW again after another strong performance for the Blues.

The 22-year-old furthered his claim for a spot in the June All Blacks squad with a solid all-round performance making 9 tackles, 7 carries and 2 turnovers.

He beat off the likes of Kwagga Smith & Javier Ortega Desio.

Wright had a brilliant game against arguably the best scrumhalf in world rugby right now.

He started the game well with two great kicks that lead to the Sharks taking an early lead and continue to control the Sharks attack throughout the game.

du Preez joins his halfback partner in the starting lineup. du Preez maintained a 100% kicking record as he spurd his side to victory over a powerful Highlanders side.

He ran a great support line following Curwin Bosch's break to receive the pass to score. He also picked up two try assists and made 21 running metres and beat 1 defender.

Beauden Barrett & Richie Mo'unga also had big games for their respective sides this past weekend.

A hattrick hero against the Lions Lam took his season total to 12 tries in 9 matches.

He made 73 running metres, beat 3 defenders and made 3 clean breaks on his way to a superb hattrick.

Ryan Crotty, Rieko Ioane and Kurtley Beale are all edged out by Andre Esterhuizen this week as the Sharks centre put in a man of the match agains the Highlanders.

Esterhuizen was strong on attack and defence he put the Sharks on the front foot with strong ball carriers and was massive on defence keeping the likes of Teihorangi Walden and Rob Thompson at bay.

The big centre made 64 running metres beat 7 defenders and made 4 clean breaks.

Proctor was one of the main reasons the Hurricanes secured a comfortable victory over the Lions.

He ran clever lines throughout the match which kept the Lions defence guessing. He made 51 running metres, beat 6 defenders and came up with two try assists.

Lukhanyo Am and Jack Goodhue were not far off from making the side either. 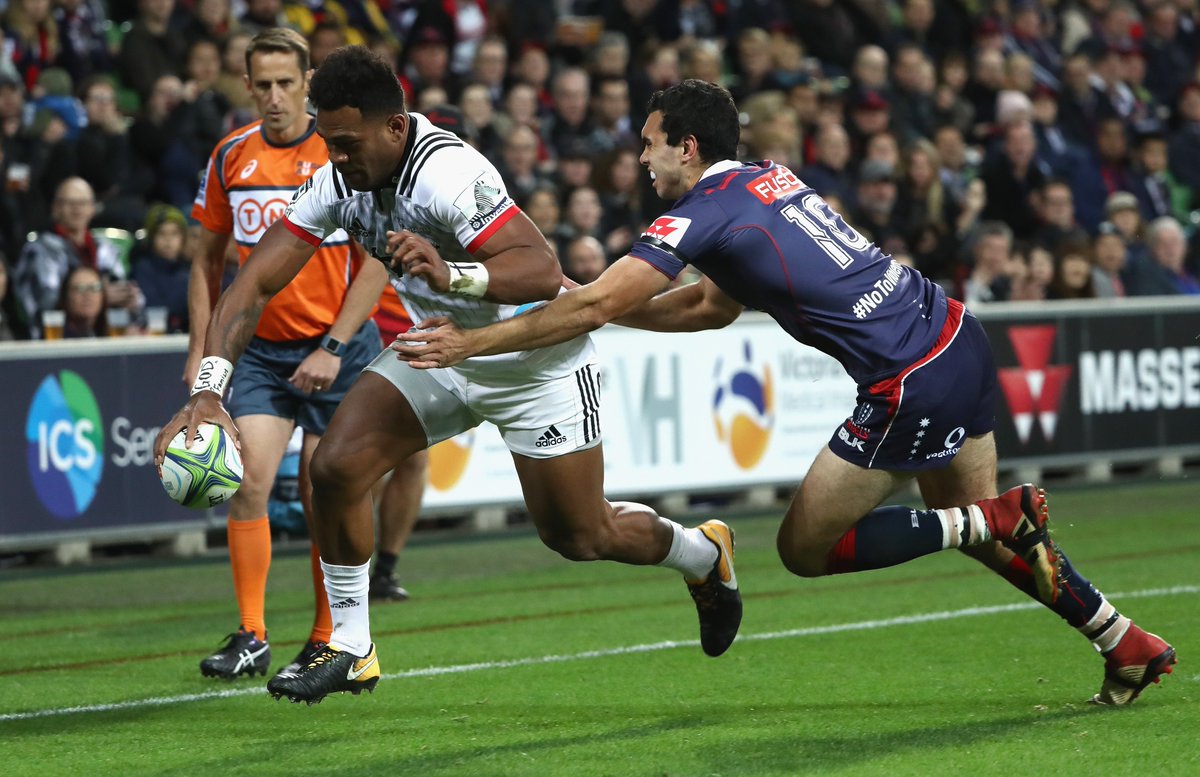 Tamanivalu had stiff competition for the right wing spot this weekend with his fellow Sader Manasa Mataele making a huge impact off the bench while Sbu Nkosi put in arguably his best performance in for the season.

Tamanivalu claims top spot after he racked up 74 running metres, beating 2 defenders and made 4 clean breaks. He assisted 2 tries and scored a third.

97 running metres, 3 defenders beaten, 1 clean break and a try assist sees Bosch edge out Israel Folau and the ever-present Ben Smith in our team of the week.

It wasn't all attack for the young fullback as his kicking game and his positional play was exceptional for the Sharks.