Harlequins can confirm that Stephan Lewies will join the Club for the 2019/20 season.

South African international Lewies, 27, is currently on loan with Lions but played the majority of his career in South Africa with Sharks, where he made 80 appearances having made his way up through the ranks, playing in the Currie Cup aged 21 in 2013. 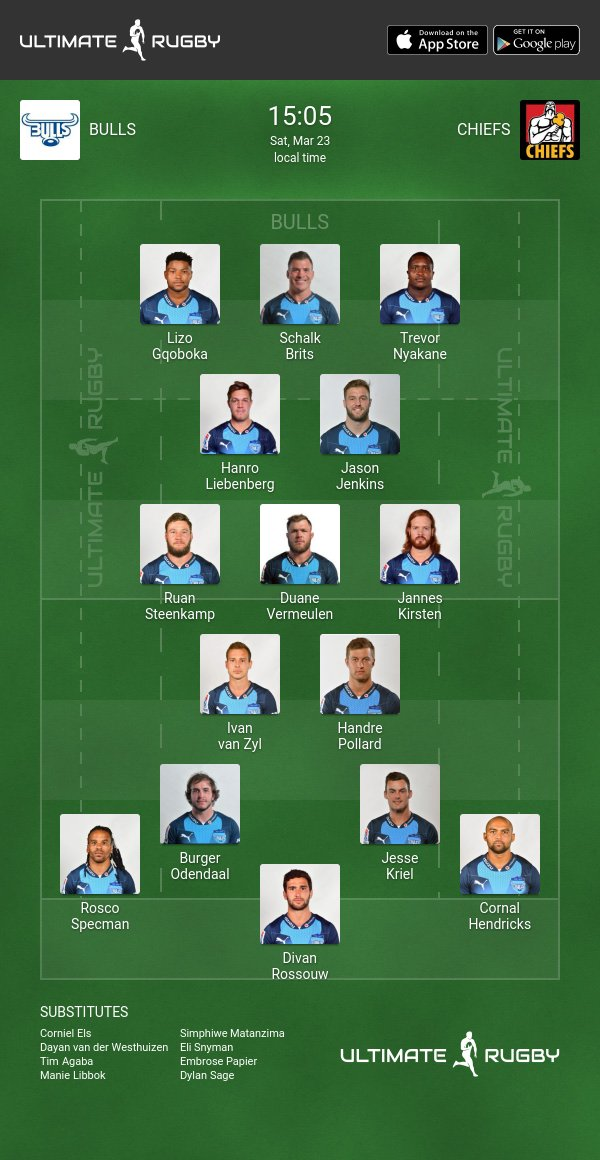 Midfielder Burger Odendaal and flanker Ruan Steenkamp will make a return to the Vodacom Bulls run-on team against the Chiefs at Loftus Versfeld on Saturday as coach Pote Human made minimal changes to his team's fifth Vodacom Super Rugby match of the season.

The return to fitness for both regular starters results in Dylan Sage and Tim Agaba moving to the bench and Paul Schoeman dropping out of the squad altogether.

Eli Snyman, who missed the win against the Cell C Sharks two weeks ago, has also regained fitness and will take his place on the bench. Divan Rossouw also comes straight into the starting line-up at fullback for the injured Warrick Gelant. Will Evans will join Harlequins from Leicester Tigers for the 2019/20 season.

Openside flanker Evans enjoyed a stellar rise through the ranks at Leicester in the closing stages of the 2015/16 season, making his senior debut for Leicester Tigers and then going to the World Under-20s Championships with England who reached the final and was then deservedly named in the competition dream team. Wasps have revealed that hooker Tom Cruse has signed a new deal with the Club.

He becomes the ninth Wasps first-team player during this season to commit his future to the Club, as Director of Rugby Dai Young prepares for the 2019/20 Gallagher Premiership campaign.

All four Welsh regions will be retained All four Welsh regions will be retained according to a joint statement from the Professional Rugby Board.

The Cardiff Blues, Dragons, Ospreys and Scarlets will continue to represent Welsh professional rugby in domestic and European competition for season 2019/20 – the Professional Rugby Board (PRB) confirmed today. Read more The first weekend of 2020 will see current Grand Slam champions Wales begin their defence of the title against Italy at Principality Stadium in Cardiff while Ireland will play Scotland at Aviva Stadium in Dublin.

CLICK HERE TO SEE ALL THE 2020 GUINNESS SIX NATIONS FIXTURES

CLICK HERE TO SEE ALL THE 2021 GUINNESS SIX NATIONS FIXTURES It has been reported in Australia that the Sunwolves may not be part of Super Rugby's future and matters should be clarified this week.

SANZAAR will make an announcement on the future of Super Rugby on Friday amid reports the Sunwolves will be axed.

Media in Australia reported that the Tokyo-based franchise are to be cut from the competition after the 2020 season. Full story

Glen Young will join Harlequins from Newcastle Falcons for the start of the 2019/20 season.

Second row Young, who has represented Scotland U20s, has been with Newcastle since he played for their U18s in 2012/13. Two years later he broke into the First Team and represented his country’s U20 side seven times.

Northampton Saints have announced that Joe Wallace will be leaving the Club with immediate effect to join Italian side Rugby Colorno for the remainder of the season.

After joining the Club at a young age, Wallace rose through the ranks with Saints’ under-17s and under-18s sides before captaining the latter for the 2018 season.