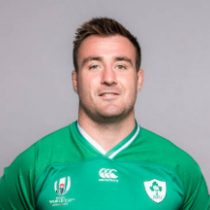 Niall captained the Ireland U20s at the 2012 Junior World Championships in South Africa and made his British and Irish Cup debut in January 2013 against Aberavon RFC.

He made his British and Irish Cup debut in 2013 against Aberavon RFC and secured a development contract for season 2013/14 after completing two years of the academy program while his younger brother Rory was promoted to the academy.

He made his senior debut as a 30th minute substitute for the injured Duncan Casey against Scarlets and followed that up a week later with a start against Connacht at Thomond Park.

He hyper-extended his elbow at training in January which forced him to miss out for a number of weeks but returned in February and signed a one-year development contract extension for the 2014/15 season.

He picked up a fractured wrist injury during pre-season and will miss the start of the 2014/15 season but made a return to PRO12 action against Newport Gwent Dragons at Rodney Parade in November. He featured heavily in the 2014/15 B&I Cup campaign for Munster 'A' and finished out the season with five PRO12 appearances while securing a two-year full contract.

2015/16 proved to be a breakthrough season for the former Ireland U20s captain - he made 23 appearances, starting 10 games and amassed a total of 753 minutes of senior rugby, including a European debut against Leicester Tigers at Thomond Park.

Joined by his brother Rory in the starting line-up, the Scannells become the first set of brothers to start for Munster in the PRO12 in the December 2015 clash away to Newport-Gwent Dragons at Rodney Parade. He has sought to expand his influence over the ball at the breakdown and to utilise his obvious physicality elsewhere, while improving his defence by simplifying his approach.

He continued to flourish in 2016/17, making 26 Munster appearances and debuting on the international stage. He made his Irish debut from the start in Ireland's 6 Nations clash with Italy in Rome and went on to feature in the remaining four games.

He was nominated for Munster Player of the Year at the 2017 Munster Rugby Awards and was included in the Ireland side for the Summer Tour to the USA and Japan, playing all three Tests and scoring his first international try against the USA. In that same Test, he and his younger brother Rory became the first Munster brothers to wear Irish jerseys together on the international stage in the professional era.

He signed a contract extension in January 2017 that will see him remain at the province until at least June 2019. Scannell was included in Ireland 2018 Squad to tour Australia and added 2 caps to his 7 Test caps after a strong season with Munster.

He missed the opening weeks of the 2018/19 season with a shoulder injury before impressing in his four starts against Ulster, Leinster, Exeter and Glasgow to earn an Ireland call-up for the November internationals.

He signed a two-year contract extension in early December 2018, committing to the province until at least June 2021. Made three appearances in the 2019 6 Nations with his performances seeing being included in the Ireland Rugby World Cup squad that travelled to Japan in 2019 and featured in four games.