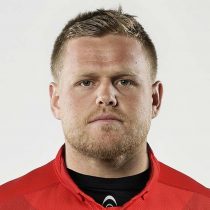 Nic Mayhew joined Harlequins in the summer of 2011 from Kiwi and ITM Cup side North Harbour. The prop, born to an English father is one of three rugby-playing brothers with Michael and Richard playing for London Irish and Newcastle Falcons.

Mayhew made his Harlequins debut at 24 years old as a replacement in the Premiership against Sale Sharks.

Mayhew joined the Brumbies in 2017 following a stint with the Blues in Super Rugby, the Rosmini College alumni making the move to Australia after two seasons in Auckland.

In late August 2016, Brumbies announced to have acquired the services of the 11-capped Mayhew on a one-year deal.

Nic Mayhew is a talented prop who adds depth to an already stacked stable of front rowers at the Brumbies.

He had an impressive first season in Brumbies colours making 13 appearances for the team throughout the season in both starting and bench roles.