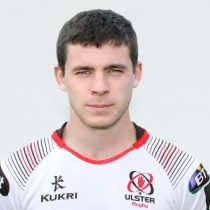 Timoney was impressive as a ball-carrying No. 8 in Blackrock College’s 2013 Leinster Schools Senior Cup-winning team and then captained the Dublin school’s 2014 success.

He played his representative underage rugby with Leinster up to U20 level. Timoney won eight caps for Ireland at U20 level last season, playing in their Six Nations and World Rugby U20 Championship campaigns, starting games in each of the three back row positions.

The St. Mary's clubman joined the Ulster Academy for the 2015/2016 season and has featured regularly for the ' A ' side.

He made his Ulster senior debut against Cardiff in April 2017 and earned two more caps at the tail end of last season, then stormed into the 2017/18 campaign with a brace of tries in a Man of the Match display against Dragons.

In February 2018, Timoney signed a senior contract with Ulster Rugby after proving he is more than capable of playing at Champions Cup & Pro 14 level.