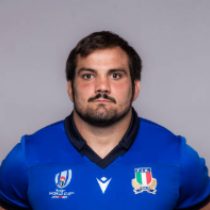 A former Italian U20 international, Quaglio represented club side Rugby Rovigo Delta between 2009 and 2016 before joining Benetton Treviso.

He was handed his first call-up as injury cover in the 2016 November Test clash against Springboks.

As of December 2019, Quaglio has made 30 appearances for Benetton and has scored 5 points.

In March 2020 he signed a new deal with the Italian side until 2022 before announcing in 2021 that he would leave the green-and-whites club one year earlier than originally foreseen by the contract.