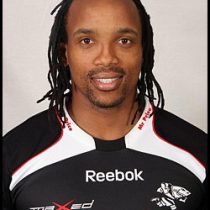 A true Sharks Rugby legend Odwa Ndungane has amassed over 141 Super Rugby caps since debuting against the Sharks for the Bulls in 2004.

The experienced Springbok wing is one of the most reliable outside backs in the country.

Always cool under pressure, his excellent decision-making and well-rounded skillset make him one of the most respected backline players in South Africa.

The veteran winger, along with his twin brother Akona, started their professional careers at the Might Elephants (now EP Kings) before moving to Pretoria to join the Bulls in 2004.

Odwa signed for the Shark ahead of the 2005 Super Rugby season and has been reliable squad member ever since.

He made his Springbok debut in 2008 against Italy in Cape Town, two years after his brother's.

Ndungane played 9 Test matches for his country with the last of those tests coming in the 2011 Rugby World Cup against Fiji.

Despite the brothers' careers overlapping, the pair never played a Test match together.

After 249 appearances for the Sharks in Super Rugby and Currie Cup, Ndungane announced he will hang up his boots at the end of the 2017 season.