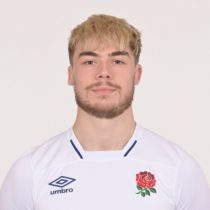 Ollie Hassell-Collins is electric winger who first burst onto the scene with London Irish earning himself a Senior Academy contract after coming through the London Irish AASE programme and has impressed with his pace and power.

No stranger to the international stage, Hassell-Collins represented England Under-18s in the summer of 2017, as well as featuring in the 2017 Singha Premiership Rugby 7s.

Hassell-Collins helped London Irish return to the Premiership ahead of the 2019/20 season after starring in the Championship while featuring for the England u20s as well.