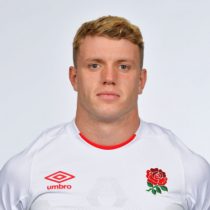 A student at Cheltenham College, Ollie is one of the Gloucester Academy's brightest young prospects. Debuting at 17, he is currently the youngest player to play for Gloucester in the professional era.

Once a regular for the Gloucester U18 side, Ollie became the youngest player to play for the first team in the professional era when he played the full 80 minutes in the LV= Cup fixture at Northampton Saints in November 2013.

Ollie became the club's youngest first-team try scorer, when he crossed against Ospreys in March 2015 in the LV= Cup and he marked his debut in the Premiership with the game's only try against the Exeter Chiefs in April 2016.

In November 2017, he was awarded Try of the week for his week 8 try against Saracens

He was part of the England U20s squad that won the Junior World Championship in June 2017.

The winger proved himself to be one of Gloucester's brightest young talents, combining pace, power and an eye for the try line.

Ollie was in fine form in 2017/18, with ten tries from 15 appearances, until sidelined by a shoulder injury but signed a new contract to remain at Gloucester Rugby.

Thorley's sensational form during the 2018/19 season was rewarded with a call up to the England 2019 Six Nations squad but failed to make his debut and was included in the 2020 squad again following some good form.

Gloucester Young Player of the Season 2019