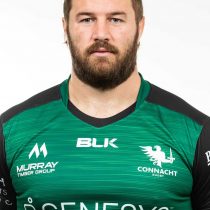 The former Ireland Schools, U19 & U20 international became a big favourite with the crowd at Ravenhill. His ball-carrying ability was a major asset to the team and despite his tender age he showed he can compete with far more experienced players in the scrum.

Paddy joined the Ulster squad on a development contract at the start of the 2010-11 season after impressing in club rugby with Ballynahinch. He went on to make 22 appearances in that season, including 10 starts.

After signing with Gloucester from Ulster in January 2015, the versatile and ball-carrying prop decided to further polish his skills with Gloucester when he signed a new contract in July 2016.

He enjoyed a fine first season with the club and made 17 appearances, following that up with 18 appearances in his second.

In September 2019, he signed a deal with Pro14 side Connacht, making his debut in a pre-season friendly win over against Munster at The Sportsground in November the same year.