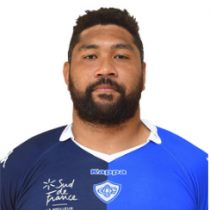 The Tongan-born, New Zealand educated prop joined Castres initially in for the 2014/15 season before signing with Dax, where he stayed until the conclusion of the 2018 season. Thereafter, the powerful front-ranker returned to Castres.

He has also represented Aukland, Northland, Canterbury, Montpellier and, on the international scene, plays for his native Tonga.