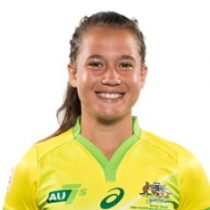 Page McGregor, a Sydney local, developed her love for Rugby Sevens after her years of representative touch football in her junior years. Both of McGregor's parents were born and grew up in New Zealand, however Page now proudly represents Macquarie University in the Aon Uni Sevens Series.

After impressive performances for Macquarie University in the Aon Uni Sevens Series, McGregor was called up to the Australian Women's Sevens team ahead of the Oceania Sevens in Fiji. Her speed and creativity was influential in the team's second place finish in Fiji, and saw her later feature in the team's first HSBC Sevens Series in Dubai, where Australia comfortably beat USA in the Cup Final 34-0. In a whirlwind year, McGregor earned a professional contract with the Aussie 7s heading into the Commonwealth Games in 2018.

McGregor has been included in the squad for the 2018 Rugby World Cup Sevens.