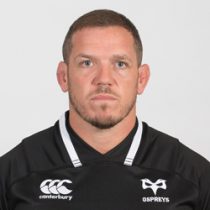 Born in Neath, Wales, James has developed into a versatile prop who can operate on both sides of the scrum making him a valuable asset to any side. He began his professional career in Wales with the Ospreys where he spent 9 seasons, amassing over 175 caps and crossing the whitewash on regular occasion.

He made his international debut for Wales in the 2009 November internationals against New Zealand. He has been a regular in Warren Gatland's National side and was selected in the recent Autumn series against Australia, Fiji, New Zealand and South Africa.

James left the Ospreys setup in 2012 and signed a two-year contract with Bath where he has a prominent role.

After two shoulder operations failed to cure a shoulder problem and caused him not feature competitively since coming on as a replacement in the Ospreys' Pro14 victory over the Dragons on December 31, 2017, James announced he would retire from playing and switch his focus to coaching.