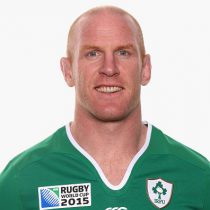 Quite simply, O’Connell has been one of the most consistent players in the Northern Hemisphere in the last ten years.

O’Connell is a tremendous lock who uses his massive frame, six foot six inches, to great effect in lineouts. O’Connell’s main attribute, though, is his leadership which has seen him captain Ireland, Munster and The Lions. O’Connell has won numerous trophies in his career, including two Heineken Cups with Munster and a Grand Slam with Ireland.

The talismanic Munster second-row exploded into 2013 Lions contention with his performance in Munster's Heineken Cup Quarter Final win against Harlequins, eventually easily making the plane to Australia. The big man from Limerick, who led the last Lions tour to South Africa, brings an intensity to the field which few can match and a level of experience that only three Lions tours can bring. In South Africa, the lineout he led not only held its own against the vaunted pair of Matfield and Botha but secured the upper hand in the second and third tests.

In his third Lions tour, this time of Australia, the hugely influential Irishman started the first two tests of the series, before succumbing to injury ahead of the victorious final test which secured a first Lions victory for 12 years. He went on to captain Ireland to a second successive 6 Nations Title in March 2015.

During the campaign he became the 4th Irish International to reach the 100 cap milestone when lining out against Wales. He was awarded the 2015 RBS 6 Nations Player of the Championship and in May was voted the IRUPA Player's Player of the Year for the second time after also winning the accolade in 2006.
O'Connell played in Munster's successful Guinness PRO12 semi-final against Ospreys in May 2015 after which he confirmed it was the last time he would probably play in Thomond Park for Munster.

In making his 178th appearance for Munster he started against Glasgow Warriors in the PRO12 final in Kingspan Stadium on May 30th 2015, in what was his last game for the province. The legendary O'Connell will represent his country for the final time at RWC 2015 having been named in the final 31-man squad for the competition. Following the tournaments conclusion, O'Connel will join up with Toulon in the French Top 14.

In early 2016 he announced his retirement from all forms of rugby following a hamstring injury sustained in the 2015 Rugby World Cup.

July 2016 saw O'Connell join the Munster Rugby Academy in an advisory role for one year.

In August 2018, the Irish legend joined the Stade Francais coaching staff as forwards coach ahead of the 2018/19 Top 14 season.