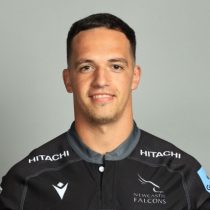 Pete Lucock is a product of Yorkshire Carnegie mini-rugby club, and has played for Carnegie at a senior level - he is the only player to have come through the ranks in such a way.

Lucock had a season-ending knee injury in the 2013/14 season but impressed sufficiently to secure a 2-year contract with Carnegie ahead of the 2014/15 season.

His firsts season under full contract with Carnegie was a season to remember as his performances earned him the Carnegie Player of the Season. Lucock made his full Carnegie senior debut against Rotherham in 2011.

In August 2020, he signed a three-year deal with Newcastle Falcons.