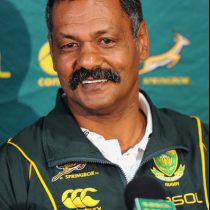 De Villiers coached the Springboks between 2008 and 2011, with his most notable achievements being a Tri-Nations win in 2009 as well as a series win over the British and Irish Lions that same year.

South Africa finished bottom in the 2010 and 2011 Tri Nations, and following a quarter final defeat to Australia in the 2011 Rugby World Cup, his contract was not renewed.

In April 2016, de Villiers agreed to undertake a role in Namibia where he will assist with the development of emerging coaches and sport stars.

de Villiers then took on a role within the Zimbabwean rugby union where he worked with the u20s before being named as the senior side's new head coach in February 2018.