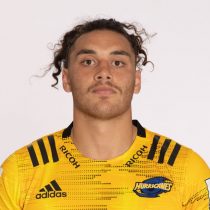 Peter attended Scots College in the city and won the Premier League 1 title with them in 2014.

The highly promising talent came out of Wainuiomata and with the name Umaga, he knows expectations are high.

Peter's twin brother Thomas Umaga-Jensen has also represented Wellington at rugby at senior level and has played Super Rugby for the Highlanders. They are the nephews of former All Black captain Tana Umaga and the late All Black Jerry Collins.

Umaga-Jensen also has the bonus of being versatile. Listed as a utility back, he can play wing, fullback or in the centres.

He helped the New Zealand U20's win the 2017 Junior World Rugby Championship and after just one season at provincial level with Wellington, Umaga-Jensen was signed up by defending Super Rugby champions, the Hurricanes ahead of the 2017 Super Rugby season.

Injury made his first season something of a false start, but Umaga-Jensen remains a big, fast athlete who is capable of playing in the midfield or the outside backs. Umaga-Jensen made his debut against the Reds in 2018 but suffered a shoulder injury playing for the Wellington Lions in the Mitre 10 Cup.

Umaga-Jensen has been named for the Hurricanes squad ahead of the 2020 Super Rugby season. He has obtained 5 caps and will be looking to add to this total.

His mid-field talents came to the fore during the 2020 Super Rugby Aotearoa season – after earning himself starts against the Chiefs, the Blues and the Crusaders.

This lead to him signing fresh terms with the Hurricanes until the end of 2022.