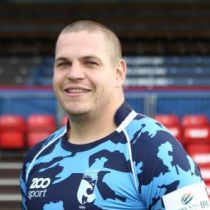 At the age of 18, Boulton began training with Rotherham Titans and later progressed to play for the club. He was then invited to join the academy setup at Leicester Tigers under the stewardship of Richard Cockerill.

After signing a two-year scholarship deal he was loaned out to Nuneaton RFC before returning to Rotherham Titans the season after.

In 2008 Boulton played for the England Counties XV against the United States Eagles.

He signed a deal with Coventry, and after making 95 appearances, was named the club's captain for the 2019/20 season.