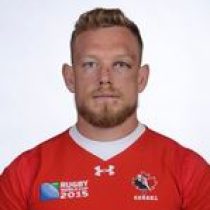 Phil Mackenzie currently plays for the Sale Sharks in the Aviva Premiership. Mackenzie represented Canada at youth level, which resulted in his Test bow in 2008. He went on to represent Canada at the 2011 Rugby World Cup, starting in all four of their pool matches. From 2009 Mackenzie had short stints at Coventry RFC, Esher RFC and London Welsh before joining the Sale Sharks in 2013. His younger brother Jamie is also in the Canadian national side, and both will represent their country at the upcoming 2015 Rugby World Cup in England.