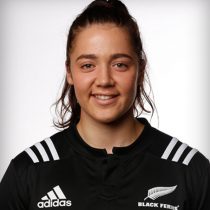 A mainstay in the North Harbour Hibiscus forward pack for the past two Farah Palmer Cup seasons, Pia Tapsell has been one of the standout forwards in the competition.

A skilful player, Tapsell is well-known for her breakdown, technical and running-game abilities and is currently the highest try scorer in history for her Hibiscus side.

Tapsell is also an outstanding sevens player and was part of the inaugural Red Bull Ignite Seven tournament in Auckland in 2018.

Tapsell enjoyed an outstanding 2018 season for the North Harbour Hibiscus where she started all seven of the side's games and scored four tries in the process.

A product of the East Coast Bays rugby club on Auckland's North Shore, Tapsell is known for her versatility and can play as a loose forward on either side of the scum, or at No 8.

Tapsell enjoyed a positive start to the 2019 season and was part of the Massey University side that won the University and Tertiary Sport New Zealand Championship. With selection for the Black Ferns, national honours beckon.